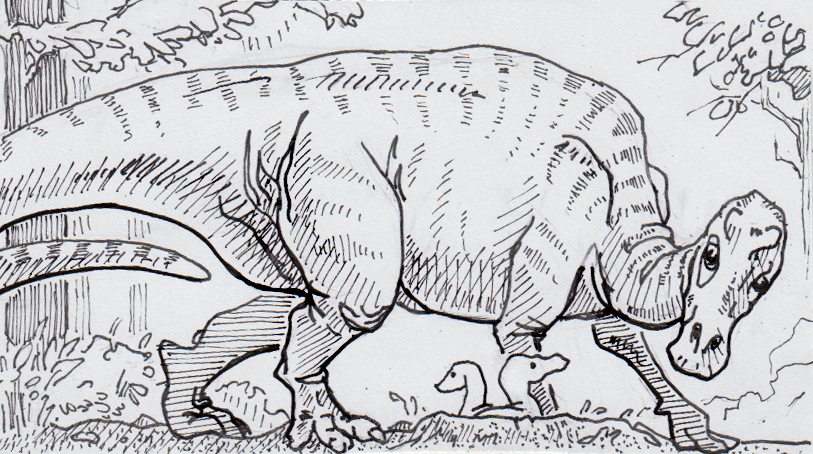 Paleontologists can tell a lot from a single bone. An identifiable piece of a skeleton can be used to estimate the overall size of the animal. Single teeth have been used to name new species. These bones can help describe the shape and size of an animal, but can’t say as much about how that animal lived, because comparing one species to another will likely introduce too many other variables to know what caused what. However, when that single bone has been found from 50 individual specimens of the same species, a very different kind of analysis becomes possible.

A bone bed in Montana has yielded a vast collection of Maiasaura peeblesorum skeletons from the late Cretaceous. Maiasuara were large, plant-eating hadrosaurs, growing up to 30 feet long. They famously lived in groups, tending to young in their nests much like some modern birds’ nesting colonies. Aside from earning the name “good mother lizard,” this communal care-taking led to the multi-generational group at the center of this study. Scientists compared the tibiae, or shin bones, of 50 specimens to see just what it meant to be a young or old Maiasuara, focusing on the growth patterns within each fossil.

Lives lived in less than a decade

These hadrosaurs weren’t living long, luxurious lives. Most of the young died by the time they were one year old. At that age they were more likely to walk on only their hind legs, and their clustering in nests indicate that they needed a lot of care. By age three, the surviving youngsters were sexually mature. The adults seemed to live fairly peacefully, growing up to 2.3 tons, and eventually living more of their life on all fours. By age eight, they were over the hill already, with signs of increased mortality. This growth curve may seem short and steep when compared to large modern animals, like a 50-year-old African elephant. Researchers instead compared their maturation to modern birds, who have a similar rate of growth.

The story told by shins

This look at shin bones is based around the idea that each Maiasuara‘s health and lifestyle would shape their growth, and that that growth would then be recorded in their bone structure, almost like rings in a tree trunk. Aside from the biographies of each specimen, the variations seen in the shins indicated that we might need to couch our size estimates when discovering other fossils. The size of a bone has often been used to determine the size and/or age of a specimen, but the variety in these 50 animals shows that that’s not a reliable metric. As more skeletons of Maiasuara are examined, there is hope that we’ll be able to further understand not just the range of sizes and shapes of these dinosaurs, but more about their lifestyle as well.