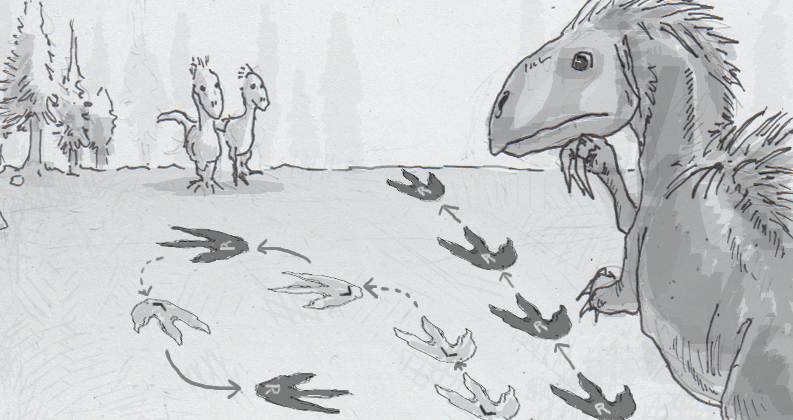 Dinosaur dating pool may have been decided on the dance floor

While a diamond engagement ring may be “forever,” paleontologists believe they’ve found fossilized evidence of courtship by dinosaurs in the Cretaceous period. Rather than jewelry, the amorous evidence comes in the form of footprints at multiple locations around Colorado. While the exact motivation of the prints is hard to definitively prove, the team from the University of Colorado believes that they are traces of a courtship dance by male Acrocanthosauruses attempting to win the favor of their fellow theropods.

Details of the dance floor

The batches of trace fossils stand out from other footprints in two main ways. First, they’re clustered together in a way that seems to show a group of dinosaurs gathering together at the same time to conduct the same activity. This makes sense as a mating display, as a group of males would have a better chance of attracting a group of females than a single animal would. The females could then pick and choose which dancer would be the best option as a mate, which in modern birds is called lekking.

The second unusual feature is the shape of the marks themselves. Instead of clean indentations, the fossilized impressions show scratch marks and signs of light digging. The largest, oval-shaped trench was over a foot deep, but the pits and mounds of surrounding earth were irregular, which indicates that the hole itself was not the real goal of the scrapers’ behavior. There are occaisonal marks from clawed toes, but overall these marks look like byproducts instead of carefully dug projects like a nest.

Beyond the physical evidence, understanding the motivations of the dinosaurs that made the prints requires looking at a bit more circumstantial evidence. If the theropods were digging for water, the definition of the scrapes would have likely been softer thanks to wetter earth. True nests would have likely had more regular mounding around the edges, and had bits of egg shells, as dinosaur nests seemed to do a decent job of protecting their eggs.

Since non-avian theropods are distant relatives of modern birds, researchers have also looked for similar marks made in courtship rituals today. Ground nesting birds like ostriches display similar behavior, stomping and clawing at the ground to show their strength and potential nest-building prowess. However, it’s hard rule out other modern behaviors completely, including clawing for dust baths or stomping to claim territory.

Source: Dinosaurs may have danced like birds to woo mates by Michael Balter, Science Magazine