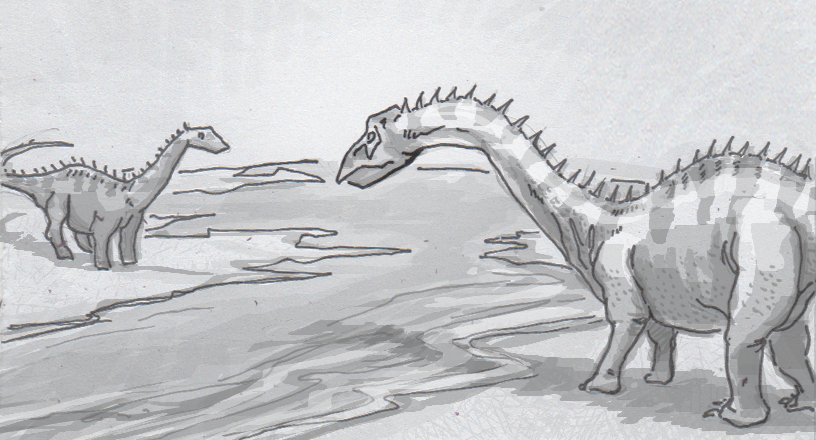 There was a time when walking could get you everywhere. What’s now North Carolina was just a hop away from Morocco. Antarctica could be accessed from India. Then, around 175 million years ago, the supercontinent known as Pangea started to break apart, separating landmasses, and thereby organisms, with newly formed oceans around the world. Still, as dramatic as the birth of the Atlantic Ocean was, it wasn’t quite as absolute as one might think. Even after North America had been ripped away from Europe and Africa, there’s evidence that many animals still had some very far reaching travels on foot.

The prime evidence of some serious prehistoric migrations are fossils turning up on the wrong continent. Stegosaurus species turn up on multiple, unconnected continents. Supersaurus, Allosaurus, and a batch of mammals and reptiles have all left remains on both sides of the Atlantic. While natural rafting is a thing, a raft that could have transported a sustainable population of 35-ton Supersaurus across the ocean is hard to imagine. A more likely explanation would be that the Atlantic Ocean just wasn’t as big back in the Jurassic period, especially in a few key locations.

The growing Atlantic was smaller 150 million year ago, but it was still big enough to dissuade most creatures from trying to swim anywhere. However, it’s possible that a few key land bridges may have been available, stretching across the Atlantic for a long enough time for some considerable migrations to take place. One bridge was though to be between North America and Scandinavia, while the other may have spanned Canada to what is now Spain. These didn’t exist simultaneously, but probably did last a few million years each, completely sufficient for various organisms to broaden their horizons a bit. It’s also possible that the Scandinavian bridge connected with another land mass leading to Russia, looping in most of the northern hemisphere to a degree.

Pinning down the exact dates of such formations is difficult, especially since they’re mostly estimated around the dates of fossils in different locations. Since it’s hard to say if that fossil was from the start or end of a migration, we might never know exactly when the Atlantic was so pedestrian-friendly.

Source: How dinosaurs hopped across an ocean by Thomas Sumner, Science News