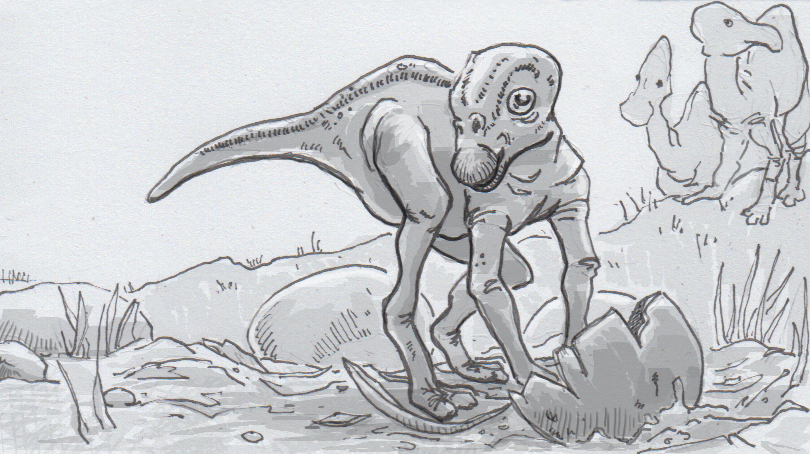 Like their reptilian and avian relatives, we know that dinosaurs were nesters. Like modern egg-laying animals, there was a lot of variety in what those nests may have looked like, but somehow dinosaur eggs needed a bit of time to incubate before new babies would hatch. Until recently, we really had no idea how long that step took, since fossils generally capture a creature’s final moment on Earth, rather than a range of time and development. Fortunately, dinosaurs’ baby teeth appear to do just that, and are now being used to figure out how old fossilized embryos were at the time they stopped growing.

Dinosaur teeth, both young and old, have incremental growth lines that can be used to determine their age. Like rings in a tree trunk, the daily deposits of dentin underneath the tooth’s outer enamel record just how long the tooth has been growing. Dinosaurs lost a lot of teeth over their life, so this isn’t the easiest way to determine an adult’s age, but for developing embryos growth lines offer a great way to figure out how long a baby was in its shell. The catch was finding enough embryos to study, since most fossilized dinosaur eggs didn’t preserve the developing baby well enough to study.

Slow to leave the shell

Comparisons of the ceratopsian Protoceratops andrewsi and the hadrosaur Hypacrosaurus stebingeri have yielded enough data to find some patterns in dinosaur gestation periods. They were notably long periods of time, ranging from three to six months. This is longer than many modern reptiles, and well past time any modern bird spends in an egg, with emperor penguins holding the current avian record of around two months. As those penguins can attest, keeping eggs safe for extended periods of time isn’t easy, although there’s a chance that not every dinosaur had to wait this long for their little bundles of joy.

Both species in this study happened to be ornithischian dinosaurs, sometimes called “bird-hipped” dinosaurs. The other group, the saurischians, include long-necked sauropods like Apatosaurus, but also the theropods, which is the lineage of modern birds. Paleontologists want to now extend the study to include some of those embryos to see if modern birds’ shorter incubation periods can be traced back to any particular evolutionary stage in their past. If ancestors of modern birds spent less time in the egg, it may have played role in their survival after most of the other dinosaurs were wiped out by an asteroid 65 million years ago. Animals with shorter reproductive cycles are generally thought to be more adaptable, and so the extended gestation of these extinct species may have made it harder for them to pivot as the environment around them suddenly changed.

Source: Dinosaur babies took a long time to break out of their shells by Carolyn Gramling, Science