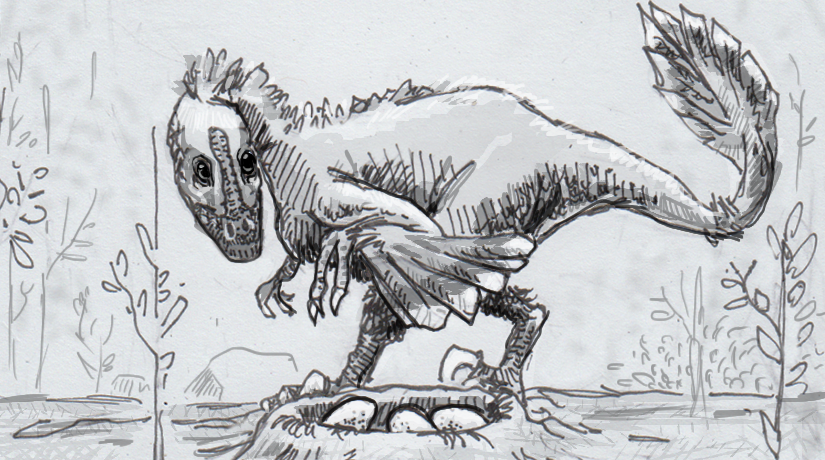 Every ancient dinosaur hatched somewhere, but it’s been difficult to know exactly where thanks to a dearth of nests preserved in the fossil record. While paleontologists occasionally get lucky and find evidence of nesting, it’s more common to find fossilized eggs than the structure where they were incubating. With that ratio in mind, scientists have turned to the eggs themselves to find clues about how dinosaurs nested, and how they went from the buried nests of crocodilians to the open, often elevated nests of modern birds.

The buried nest concept allows for an egg to be kept warm without requiring a parent stay to supervise. Modern crocodiles, and a few birds, still rely on a method where eggs are laid in a shallow impression in the earth, then buried with dirt, sticks and debris. That pile insulates and protects the eggs until they’re ready to hatch, and likely required egg shells designed for just such an arrangement. Being buried means the eggs need some extra help to allow vapor and gas to be exchanged through the shell, which leads to eggs with many large pores in their surface. Researchers found this to be more common among larger dinosaurs like sauropods, supporting other studies indicating that these big creatures weren’t sitting on their nests all day.

Open nests, like an iconic bird’s nest in a tree, placed different pressures on incubating eggs. With air passing over the eggs, pores could be smaller and less prevalent. Tighter pores would also help retain moisture in the egg, something a buried nest wouldn’t make necessary. The big advantage of such a nest is that it wouldn’t need to be on the ground, making it less accessible to predators and accidental stompings.

Comparing fossil eggs to modern, brooding birds like a sparrow, researchers found that more sophisticated theropods likely used open nest designs. It wasn’t an open-and-shut case though, and just as birds today still use a variety of nest designs, there was likely a spectrum of how open and exposed eggs were in their ancient nurseries, with none of them necessarily being completely open. Still, it’s hard to ignore the convenient sense of progression in the most bird-like theropods also acting as pioneers towards the open bird-nests we have today.