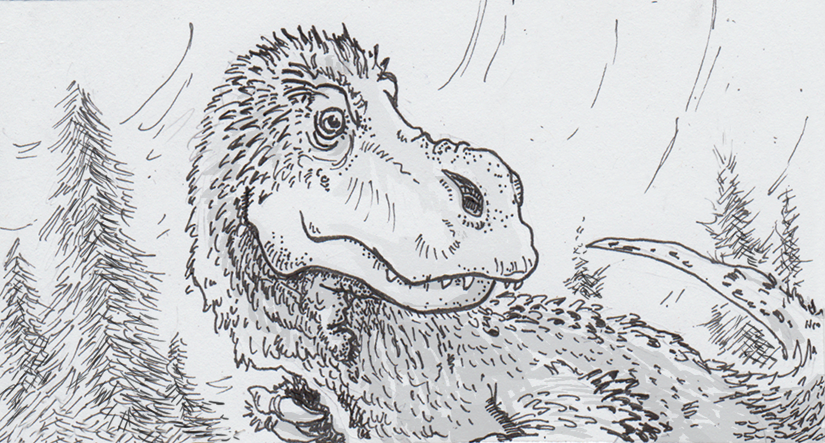 The skull of a Tyrannosaurus rex has large teeth, large eye sockets, and large sinuses. While the famous banana-sized teeth seem like the record-setting feature, the nasal passages of T. rex and many other dinosaurs were some of the largest and most complex in the world. While we obviously use our nose to smell, the size and complexity of dinosaur nasal passages may not have evolved to better detect smell, but were instead there to cool the animals’ brains.

Shedding excess heat is crucial, especially for brain matter. Whether your body’s heat coming from the environment (for ectotherms), internally (endotherms) or just because you’re so big you can’t help it (gigantotherms), you need mechanisms to not only to stay warm, but also to cool off, such as sweating or panting. While panting may have been an option for dinosaurs (like modern birds), their small brains inside their relatively large, insulating skulls probably needed the help of the closest air-intake option, being their noses.

From breath to blood to brain

Computational fluid dynamic simulations, based on dinosaur skull and nasal cavity data, has found that these giant sinuses could probably handle cooling off brain tissue, if indirectly. As the dinosaur exhaled, blood vessels lining nasal passages could shed their heat and have it carried out of the skull with each breath. That cooler blood would then circulate past the brain, ready to wick heat away again. The complex shape of dinosaur sinuses increased the surface area of the sinus, allowing even more blood vessels to be exposed to the respired air at once.

This isn’t the only case of anatomy having double-duty to help with heat. Among modern animals, jackrabbits shed heat by pumping warm blood through their thin skinned ears, letting the heat radiate out into the surrounding air. While birds do have surface area in their wings, most of that is feathers, lacking the blood-flow of rabbit ears or dinosaur noses. Instead, birds have been found to expel heat where they expel everything else— their butts (or cloaca, to be more accurate), relying on evaporating water vapor. If dinosaurs, as a form of ancient bird, employed the same method to shed heat is unknown, but it might make inhaling to cool their brain a bit of a mixed blessing.