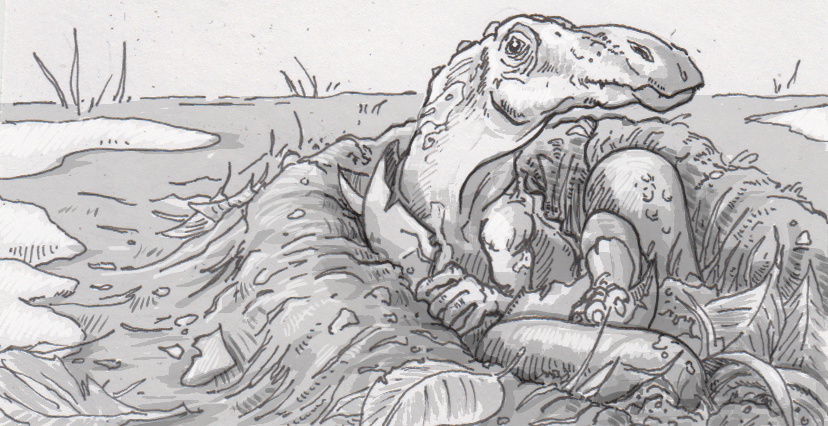 Dinosaurs’ methods for maintaining the temperatures needed to incubate their eggs

In 2015, paleontologists announced the discovery of Ugrunaaluk kuukpikensis, a 30-foot-long hadrosaur found in what would have been the arctic circle of the Cretaceous period. The large plant-eater hinted at many aspects of its era’s ecology, but one question that’s still being studied is how these creatures took care of their eggs. In a climate that averaged around 43° Fahrenheit, a bulky body could probably insulate itself sufficiently, but that wouldn’t have helped eggs too fragile to sit on.

Researchers from the University of Calgary have been looking into these questions, surveying fossilized nests from around the world. The most obvious nesting behaviors have the clearest connections to today— feathered birds as modern dinosaurs use their body heat and feathered insulation to sit on their eggs to maintain the temperatures needed for incubation. Scientists are confident that many extinct dinosaurs did the same thing, as long as they had the feathers and size to make it work. Lighter-weight theropods, like oviraptors, have even been found on their eggs. Analysis of the oxygen isotopes in the fossilized eggshells and embryos point to the eggs being kept at around 104° Fahrenheit, well within reason for a doting parent’s body to provide.

Sizzling from the Sun

Of course, sitting on a nest wasn’t an option for all dinosaurs. Aside from possibly lacking the insulating feathers of theropods, many animals were just too big to put their weight on their eggs. For these creatures, researchers have considered other modern relatives of dinosaurs, specifically crocodiles. Crocodiles, and some birds, can take advantage of their warmer climates to capture a lot of warmth from the Sun.  They bury their eggs in a mound of sandy dirt to insulate the eggs, presumably trapping more heat than they block in the process. Eggs of especially large dinosaurs, like the long-necked sauropods, turn up in soils that would be a good match for this kind of incubation.

When the sunshine might not be consistent, dinosaurs probably had other strategies to rely on. Like modern malleefowl, some species maybe buried their eggs in more than just dirt, adding layers of plant material into the mix. As those plants decomposed, the microbes eating them would release heat, and that heat could be sufficient to keep buried eggs warm, even in colder climates. Nests from hadrosaurs, like U. kuukpikensis, have been found to have a fair amount of plant material fossilized with other soil. With a good supply of rotting leaves, this method probably got a lot of dinosaurs through their extended gestation, even up north.

For as compelling as the above examples are, they’re not definitive. Even dinosaur eggs were fragile, and so there aren’t a lot of examples to study and confirm exactly how widespread the above nesting techniques really were. It’s possible that dinosaurs had other methods to care for their unborn eggs, although we have yet to find evidence of more radical adaptations, like live birth that lets a mother skip nest building altogether. For now, we can only speculate on if Nanuqsaurus hoglundi ever followed one of the more famous forms of incubation in the cold, carrying its eggs on its clawed toes for months at a time like a penguin.

Source: How did dinosaur eggs survive in the Arctic? by David Moscato, Earth Touch News Network