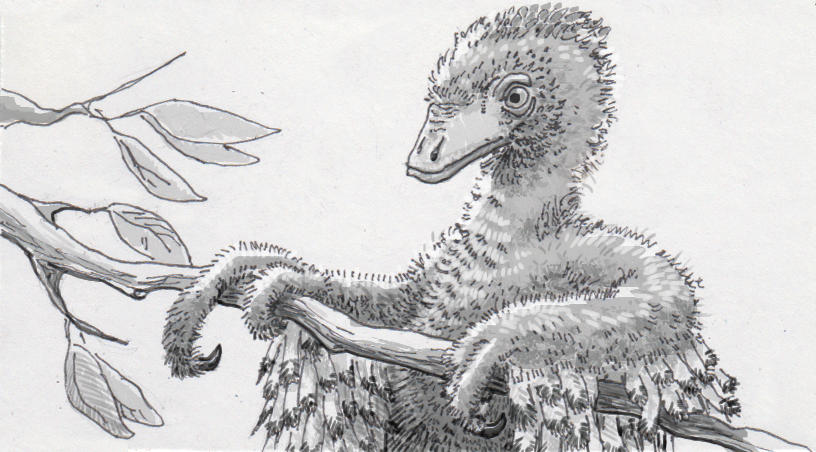 Dinosaur’s unusual feathers maximized fluffiness over all other functions

A penguins’ feathers help insulate its body. An eagles’ primaries can form a surface to create lift. An Anchiornis‘ feathers…well, that’s difficult, because nobody has ever seen this Jurassic period dinosaur make use of its plumage. Complicating things further, Anchiornis‘ feathers were a very odd shape, deviating from the fluffy down or stiff primaries you see on modern birds. According to paleontologists from the University of Bristol, one of the most striking effects of Anchiornis‘ odd feathers was simply how floofy they must have made this dinosaur look.

Your average flight feather on a bird today is stiff, with the vanes coming together to form a single plane that can contribute to creating lift, or at least help streamline a bird’s silhouette. Some feathers, like the decorative plumage found in peacock’s tail, are looser, fanning out while still retaining a unified shape. Anchiornis seems to have been an evolutionary experiment, with a feather shape that doesn’t seem to have withstood the test of time. Instead of a tapered tip, the vanes in this dinosaur’s feathers split in two distinct directions, forming a “V” shape. En masse, it would have made for a fluffy, uneven profile, with the tufts of thick fluff covering the paravian dinosaur’s whole body.

These feathers wouldn’t have been great at creating lift like the flight feathers on a modern bird’s wing, but that doesn’t mean that Anchiornis was stuck on the ground. It actually had wings on it’s arms and legs, each with multiple layers of feathers to help catch the air. It wouldn’t have been capable of powered flight, but probably could glide between trees on these thick, fluffy wings. The fluff would have also created a lot of drag in the air, so Anchiornis was also adept at grasping at tree branches, looking more like a shaggy monkey than the robins, crows and parrots we can see perched in trees today.

One thing Anchiornis‘ feathers could do as well as their modern counterparts is to provide coloration. Sure, crisp lines and detailed markings may have been a bit of a stretch, but previous studies have found evidence of the pigments that once colored this creatures’ floof. Wings were likely light, with dark spots along feathers’ “tips,” while the majority of the body was a dark gray or black. These colors may have served to impress peers, but likely also resembled the dappled light and shadows that would have been found in Anchiornis forest home. Obviously, modern birds prove that the “V” shape feathers weren’t strictly necessary to remain camouflaged or soar through the air, but evolution doesn’t always iterate along a single design path.

Source: Feathered dinosaurs were even fluffier than we thought, Phys.org