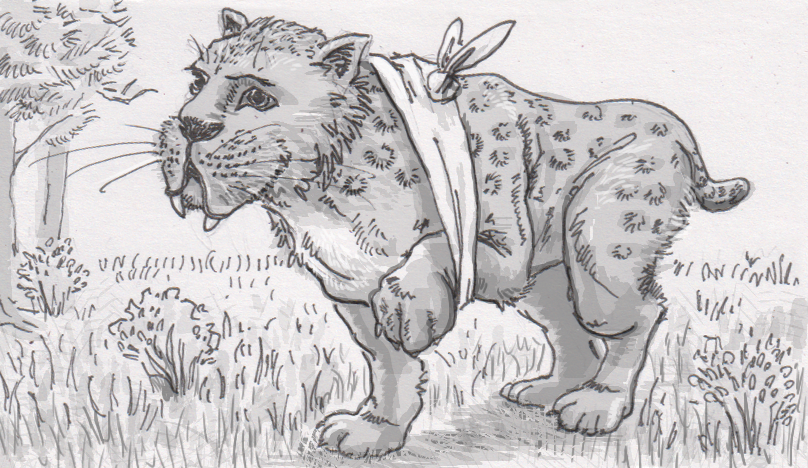 From the perspective of prey, it seems like one sharp, pointy tooth is just as good as the next one. Anything thing that is going to pierce your delicious flesh is something to be avoided, regardless of if it’s going to slash or stab you. In the first split-second of an encounter with a predator, this instinct is true, but analysis of injuries in some of history’s most impressive predators shows that these details do count, as different species hunted prey in very different ways. It might not mean that every predator has a “weak spot” to exploit, but it does provide information about how different species needed to do their hunting.

Paleontologists conducted a massive survey of both dire wolf (Canis dirus) and saber-toothed cat (Smilodon fatalis) bones that had been found near the La Brea Tar Pits in Los Angeles, California. Both carnivores were very effective predators in the Pleistocene period 12,000 years ago, but the injuries in their recovered fossils point to very different hunting styles. From those injuries, scientists have reverse-engineered what kind of hunting activity each species was most likely to engage in, even if they were still after the same end result of a meaty meal.

Fractures from attacking with claws versus faces

Dire wolves looked a lot like their modern relatives, only slightly larger. They likely hunted in packs, running down prey while biting at legs, tails, or anything else they could get a hold of. This biting carried some risks though, since it meant putting your face in contact with what could be the very strong legs of an Ice Age bison or camels. The likely result of this biting was a lot of injured skulls and necks from being kicked, plus feet and ankles from tripping up during a pursuit. With limbs only suitable for running, pushing their faces at prey was wolves best weapon, even with the risks involved. The wolves saving grace was likely their teamwork, since it meant that no single member of the pack would have to run down a larger animal on its own. As a group, the wolves could operate like many modern canids, chasing and nipping at prey until their target started to give into exhaustion.

Simlodons, while eating some of the same animals as wolves, showed very different injuries. Instead of attacking face-first as you might suspect with famously-large canine teeth, the extinct cats seemed to have saved their teeth for later in the fight. It’s likely that they worked as solitary ambush hunters, taking down prey with large, muscular forelimbs and claws. Judging by the many intact fossil teeth, and the hunting styles of some modern cats, Smilodon likely waited to attack their prey’s neck with their large teeth until they’d managed to subdue their target. This kind of wrestling and clawing turns up in fossils as injured shoulders, forelimbs and backs, leaving their heads and necks intact. While not every meal was easy to come by, these tactics probably worked well enough to go after larger prey than dire wolves regularly attempted.

People have known about these sorts of injuries for some time, but attributing them to each animal’s lifestyle hasn’t previously been possible. As individual anecdotes, many of these cracks and fractures were thought to be trace evidence of particularly fierce battles or accidents. By surveying over 35,000 bones however, paleontologists were able to identify just how regular these sorts of injuries were. To the injured wolf or cat, it may not have mattered if they were just unlucky or in a fierce fight, as one injury may be just as bad as the next one, but the systematic nature of these risks on a larger scale is now apparent. In the end, Smilodon suffered a bit more frequently, turning up with injuries 4.3 percent of the time to wolves 2.8 percent of the time, but neither species was being cut out of a meal frequently enough to change their hunting strategy.

Source: The dangers of being a saber-toothed cat in Los Angeles 12,000 years ago by Stuart Wolpert, Scienmag