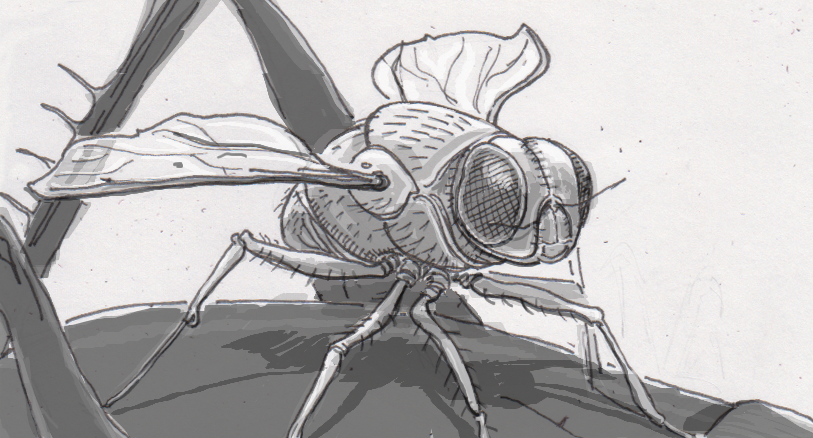 A very important feature of your ears is the space in between them. That’s because a lot of the information you gather about sounds in the world around you gleaned from comparing how they differ from one ear to the other. The 100 milliseconds it takes for a sound to travel past one ear to reach the other, known as the interaural time difference, is automatically processed by our brains to help us determine the spacial source of a sound. That way, you can find where a creak, beep or cry is coming from, or in the case of Ormia ochracea, a male cricket so you can deposit a lethal larva into it’s body.

Ormia ochracea is a yellow, nocturnal fly, no bigger than your fingernail. At night, females fly through the dark, navigating by their hearing to find male crickets chirping for mates. The female flies are interested in reproduction too, but they’re after the crickets as hosts for their larvae, which will eat their way out of the cricket a few days after being implanted. In broadcasting for a mate, the unwitting bachelors give away their location to the flies, although if you’ve ever had a cricket in your house you’ll know how hard it can be to really locate a hidden cricket, interaural time differences and all.

The flies can do it though, as they have some of the most sensitive directional hearing in the world. Instead of using ears on their head, they use sound-sensitive structures on their front legs (which is similar to the “ears” of a cricket.) A point of interest to researchers is that these membranes are so close together that sound hardly has time to be separated before it passes from ear to ear, so any kind of interaural time comparisons have to be made on a nanosecond timescale. This is of great interest to  engineers designing directional microphones for small spaces, such as hearing aids, but it has also revealed a considerable weakness in the fly’s hearing.

To help calculate the direction of a sound, the fly’s ears two-part structures, coupled in the middle. That coupling means that comparisons between incoming sounds can be made instantly, as sound hitting one side mechanically triggers activity in the other. The fly’s brain gets a clearer one-two signal to process, letting it pick apart these minuscule differences in stimuli. However, that same solution makes the flies very vulnerable to louder, distracting noises. A loud noise in one ear can essentially knock out the second ear, as both end up vibrating. In lab tests, distracting sounds could pull flies off their path towards a cricket, apparently unavoidably.

Researchers now need to figure out how these O. ochracea handles loud noises in the wild, or if noise pollution poses more of a threat to their reproduction than was previously appreciated. Assuming they can somehow cope with distracting sounds, recreating that feat would enable better microphones, radar and other sound-sensitive technologies that we need to pack into spaces the size of fly legs. Until that can be determined, this supremely-accurate hearing remains on our biomimicry wishlist.

Source: This parasitic fly’s incredible hearing remains a curiosity to those trying to develop better hearing aids by Don Campbell, University of Toronto