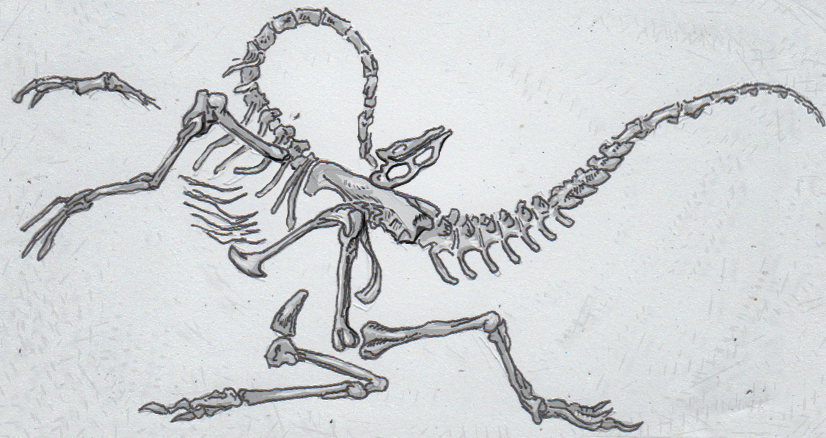 Discovering details about the ‘dinosaur death pose’ from frozen fowl

Paleontologists don’t have tons of options when it comes to getting data. While technology is helping them discover more fossils all the time, there’s still a lot of crossed fingers and hoping that a question can be answered by a yet-to-be-found specimen. They can’t just design an experiment on their own terms, with the exception of some folks studying the postures of many dinosaur skeletons. They were able to just head down to the grocery store for some dead chickens.

The chickens were used in a study of opisthotonic posture, a contortion of the body so popular among dinosaur fossils it’s sometimes called the “dinosaur death pose.” From hadrosaurs to allosaurs, a huge number of skeletons have been discovered with the head and neck arched backwards towards the animal’s hips, sometimes so far that the tip of the nose actually touched its back. This posture was originally named to describe a symptom in a variety of human disorders, from meningitis to branched-chain ketoaciduria (aka, maple syrup urine disease!) While the hyperextenseion has been explained in living creatures, there’s still lots of room for debate about why it turns up in dinosaur corpses.

Possible explanations for the curved necks include dramatic muscle spasms as the animal died, being caught and jumbled in flowing water, as well as unevenly decaying ligaments. The final theory assumes that as the body decomposes, ligaments that pull back on the head and neck last longer than the tissues that normal counter this motion. When those tissues are decomposed, nothing impedes the ligaments pulling the head back. While we’re unlikely to find any of these connective tissues in the fossil record, scientists have been checking in the meat department at the grocery store.

While it’s often overlooked thanks to size and teeth differences, modern birds offer opportunities to test some of these concepts, especially since they still curl up when dead. In 2011, researchers laid plucked chickens on sand for three months to see if the rotting bodies would adopt the opisthotonic posture. When they never contorted, they tried the chickens in cool water, which triggered a head movement in just moments. Earlier tests of this concept had used salt water and quails, which did not yield the dramatic posture.

More recently, chickens were again used just to test the flexibility of modern dinosaurs, for inference about their ancient relatives. Researchers found that the necks were very supple when moved backwards, but not at all when being tucked forwards. This doesn’t solve the root cause of this posture, but it does help provide a structural basis for why it’s so consistent, whatever the cause. In the process of arranging their test subject, researchers also noted that the joint at the base of the skull with the neck is particularly lose, granting the animal a wide range of motion, but also risking easy decapitation. Again, a chicken isn’t a perfect proxy for a Tyrannosaurus rex, but this may help explain why so many fossils are found without an articulated skull.