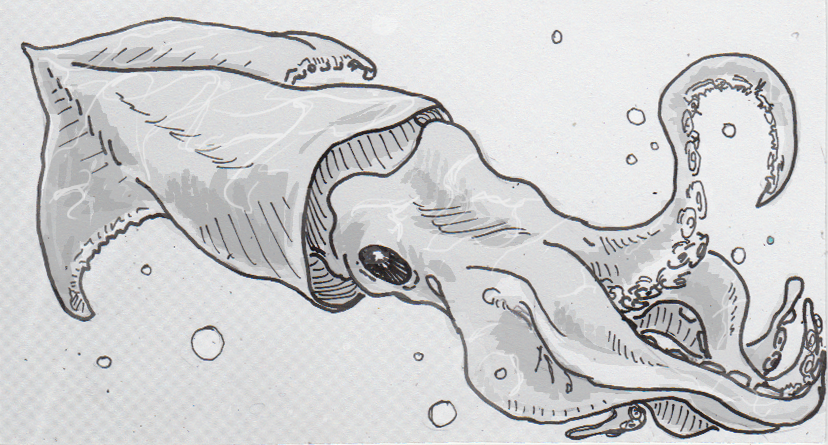 Last month my first-grader spent a week in Massachusetts, using every available moment at the shore to find crabs, bugs, fish, shells, seaglass, etc. One of the peaks of these explorations was finding a small clutch of what turned out to be squid eggs among some plants near a dock. Based on her enthusiasm, I can only imagine the reaction to a blob of squid eggs the size of a small car, found earlier this summer off the coast of Turkey.

The divers that found the blob didn’t recognize what it was when they found it, and for good reason. Underwater, it looked like a large, clear bubble and was soft and squishy to the touch. When they shined a flashlight through it, you could see that it was a collection of some kind of tiny particles, but they were so small it would be hard to recognize them as larval squid.

So what squid possibly produced such a giant mass of tiny eggs? At this point, most guesses point to a red flying squid called Ommastrephes bartramii. O. bartramii can grow up to five feet long, and sometimes flatten their tentacles and fins as they propel themselves out of the water for brief “flights”. The only other squid known to produce such large bundles of joy are the humboldt squid, also known as El Diablo Rojo thanks to their aggressive and clever behavior (and dashing red coloration!)

Beyond these two sightings, squid eggs aren’t normally found in such large masses. Aside from their translucent nature, we might be missing them because they’re usually floating deeper in the water, and that the mass likely only lasts around three days before the babies start hatching. When the estimated 600,000 to two million babies are born, they’ll start with undercooked eyes and fused tentacles. It’s likely that they hide in deeper depths until they’re mature enough to travel in busier waters safely.