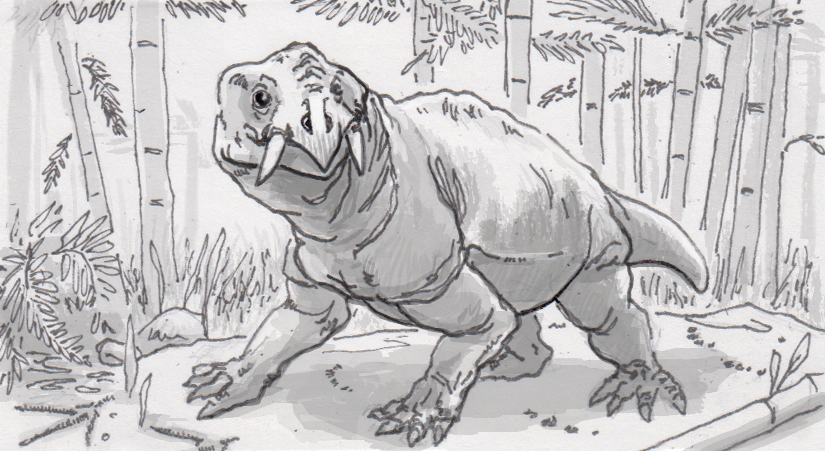 Around 70 years ago, two sets of fossilized footprints were found in South Africa. One was clearly a Triassic era dinosaur, but the other… didn’t make sense. The five-toed prints most closely resembled the feet of a dicynodont— a group of stocky, beaked-and-tusked herbivores that were widely believed to have gone extinct at the start of the Triassic period. While both sets of prints were acknowledged to contemporaneous of each other, the confounding dicynodont prints were basically ignored. The puzzling prints are finally getting explained though, largely thanks to modern paleontologists and an eccentric librarian from the 19th century.

Discovered but not formally described

Alfred “Gogga” Brown was employed as a librarian, postmaster and postman, but his real vocation was as a paleontologist. The self-taught scientist is credited with the discovery of 21 species of dinosaurs, reptiles and fishes, although he only published on paper on his work. Working on his own, Brown managed to collect a set of fossils in his adopted South Africa in the 1870s. They were never properly examined and described, as Brown had difficulty getting any paleontologists in Europe to take much interest in his work. As such, this batch of mystery fossils remained in storage at the Natural History Museum in Vienna, presumed to be fragments of a Triassic dinosaur.

Fortunately, Brown’s fossils have now been given a closer look and a new species name to boot. Pentasaurus goggai, named for Brown’s “Gogga” nickname, was found to be a close match for the mysterious footprints found decades ago. The animal was clearly a dicynodont synapsid, and as such is more closely related to mammals than dinosaurs or reptiles. They were widespread in their heyday, living all around the world until (mostly) going extinct at the end of the Permian period. However, this combination of trace fossil footprints and recovered skeletal fossils helps prove that some species managed to survive alongside the dinosaurs that were coming to dominate the planet’s terrestrial ecosystems.

Strangely, Pentasaurus goggai is not be the only dicynodont to cause confusion by not going extinct when it was supposed to. In 1915, fossils of a dicynodont were found in Queensland, Australia, although their identity was controversial because they were found in Cretaceous period rock layers. That’s around 60 million years past these creatures’ supposed extinction, prompting vigorous tests in 2003. Taken together, it’s becoming increasingly clear that dicynodonts lived much longer than paleontologists once believed, although how they managed to hang on as their ecosystems were upended by new species isn’t totally clear yet. Maybe the next answer is still in museum’s collection somewhere.