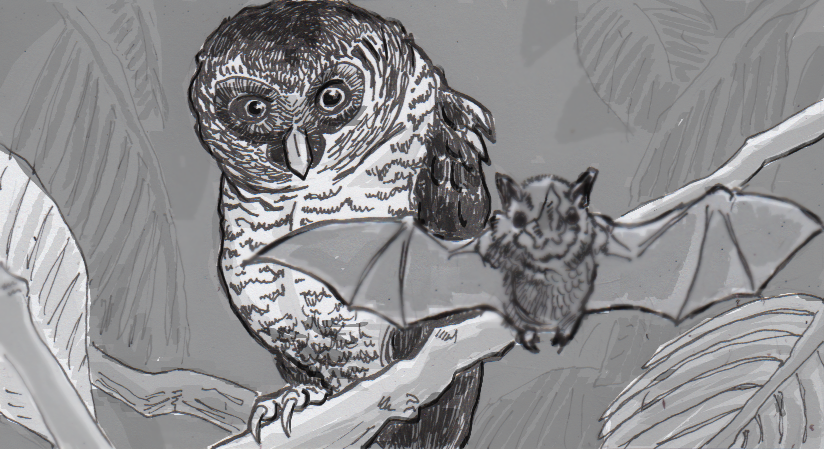 Depending on the particular species at hand, a bat might eat fruit, insects, blood, small mammals and reptiles, frogs or possibly even another bat. This shouldn’t be taken as a sign that bats are anything like an apex predator though. Like many smaller mammals, they have predators stalking them every time they go out for food, or sometimes when they return home. With all the ways that members of Chiroptera have evolved to find their various sources of food, who gets the upper hand on bats?

The first group of bat predators operate as ambush hunters, for the most part. Snakes will sometimes lie in wait near fruit, catching bats who come by to eat. Roosting bats occasionally targeted by raccoons, weasels and minks, who either grab bats while they sleep, or try to capture them as they leave their home to hunt at night.

Leaving the roost can put bats at risk from more active, flying predators as well. The aptly named Bat Falcon (Falco rufigularis) will eat everything from dragonflies to hummingbirds, but will target bats if it locates them at dusk. If the falcon can find where bats are roosting, it will wait until they’re leaving to hunt for the night, then swoop in to capture bats before they’re really aware of the bird’s presence.  Most of these attacks are carried out by the female falcons, as they are usually around 3 inches larger than the males, making it easier for them to hunt larger prey.

Once a bat makes it out for the night, it might not be out of danger. Black-and-white owls (Strix nigrolineata) have learned to hide in trees or near caves, then catch bats in mid-flight. They’re not too picky about which bats they catch, and their pellets have been found with the remains of Mexican fruit bats, black myotis, black mastiff bats, wrinkle-faced bats and tent-making bats, as well as various smaller bird species. With the majority of these targets being frugivores, it’s possible that the owls take advantage of these species’ less developed echolocation to get close without being detected. The owls seem to have also learned to exploit artificial lighting, as it attracts and distracts the bats, making them easier to catch.

While these various predators may be bad for individual bats, none are likely to really endanger overall populations. The biggest threats to bats aren’t actually trying to eat them at all. One is white nose syndrome, caused by an easily transmitted fungus that has killed millions of bats around the world, threatening some populations with extinction. The other risk to bats is of course, humans. Thanks to fears about rabies, myths about blood-sucking, and less direct issues like habitat encroachment, humans have trapped and killed many bats, despite the fact that we greatly benefit from their activity in our ecosystem.