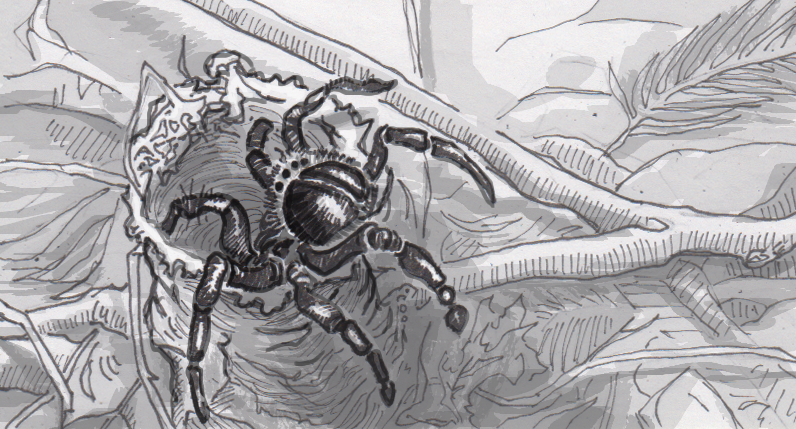 Turret spiders love their homes, or rather, they hate being outdoors. The small spiders are extremely sensitive to dehydration, and are thus basically trapped in their underground burrows to avoid the crisp air of California. While not actually sedentary, this fairly immobile lifestyle has turned the spiders into living records of the states geological and ecological past. By following where the turret spiders live, we can know what conditions in that area were like before any humans wrote anything down.

Never straying from the shade

All animals carry the genetic legacy of their ancestors’ environmental challenges, but turret spiders localize things even more than some creatures that are literally affixed to their homes. To avoid drying out, baby spiders avoid migration strategies, like ballooning, that let other species find new homes with less competition for resources. Instead, turret spiders will usually stick to the same shady, north-facing slope as their mother, building their burrow close enough to hers to often create a little cluster of turrets. This means that the spiders are probably competing for resources with their siblings to a certain degree, but apparently that beats a walk through the hot sun to find a more exclusive place to build their home.

The burrows themselves are similar to what trapdoor spiders use to capture their prey. However, instead of putting a door on the hole like their relatives, turret spiders use webbing, soil and leaf litter to build a little wall, extending their burrow’s entrance about an inch above ground level. When an insect disturbs that upper lip of the structure, the spider can crawl up to capture it. When clustered together, a group of turret spider burrows may even help each other, since it leaves prey very little space to maneuver safely.

When there’s no prey to capture, the spiders just sit at home. They can do this for a very long time, with male turret spiders living to be around six or seven years old before they finally venture out of their home to find a mate. That trip is generally fatal, even if they do find a mate in the immediate neighborhood. Females can reproduce without such dangerous repercussions though. They can sit in their homes for as long as 14 years without going anywhere, unless, of course, the local environment moves the spiders itself.

Looking at the DNA of turret spider populations around California, researchers found that the spiders have diverged into at least eight species. Those species have other sub-groups as well, apparently thanks to how geography divided them up. When genetic relatives of spiders in Chico were found in Monterey, researcher knew that no turret spider walked that far. Instead, it’s suspected that those relatives were divided up by an ancient flood. These past events can work the other way as well— two groups of spiders living near each other by San Bruno Mountain show clear genetic differences, and were probably separated by geological features that have since eroded away, not that the spiders seem to have noticed.

These spider populations can inform us about the past in a way normally associated with fossils, owl pellets or some plant species. However, turret spiders can’t help out researchers everywhere, because they only live in California. Who needs more territory when your horizons are purposefully so tiny?