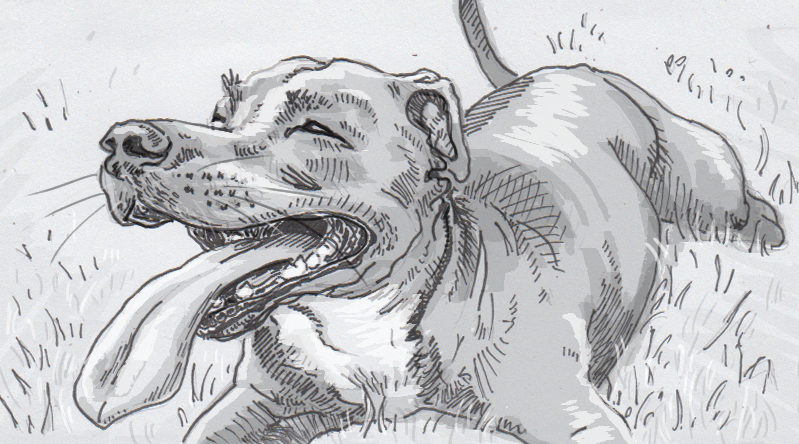 You have two kinds of sweat, and only one of them ever feels especially useful. This is because sweat made by your eccrine glands, which are all over your body, produces the watery droplets on our skin that we rely on to cool off when we’re too hot. As the sweat evaporates, it takes body heat with it, proving to be a very effective way to deal with high temperatures or vigorous metabolic activity. It’s also, oddly, the kind of sweating most mammals can’t do, which is why dogs famously have to pant to cool off.

Dogs do employ a similar strategy for beating the heat though. Instead of water evaporating off their skin, it’s evaporating off of their wet tongues, mouths and throats. Beyond that, they’re also quickly exhaling air warmed inside their bodies, exchanging that with the cooler air in their environment (unless they’re panting somewhere over 102.5° Fahrenheit.) Aside from unfortunately overbred dogs like bulldogs, panting does a pretty good job of keeping dogs cool, which makes their sweaty feet and noses a little more puzzling.

Sweating for smells and softness

The more localized sweat glands on dogs are apocrine glands. They’re commonly found among mammals, and including in the armpits of humans. The sweat produced is a bit oilier and usually smellier, although on dogs this only means their feet smell a bit salty, rather than the full-blown body odor on a stinky human. Sweaty footpads on a dog (or cat!) can help with some evaporative cooling, but that’s probably not their primary purpose.

It hasn’t been definitively proven, but dampened footpads may provide dogs with slightly better traction than dry feet. The moisture makes the skin there slightly tackier, giving them a better grip on the ground. Since apocrine sweat glands are also found on other exposed but potentially sensitive skin, like a dog’s nose, that sweat may also be acting as a moisturizing agent (some animals have these glands around their anus as well). On top of keeping skin supple, it this sweat might also be intended to help transmit smells. Beyond sharing an animal’s scents with others, moist noses on a dog might help trap environmental smells near the nose, aiding dogs’ famous sense of smell.