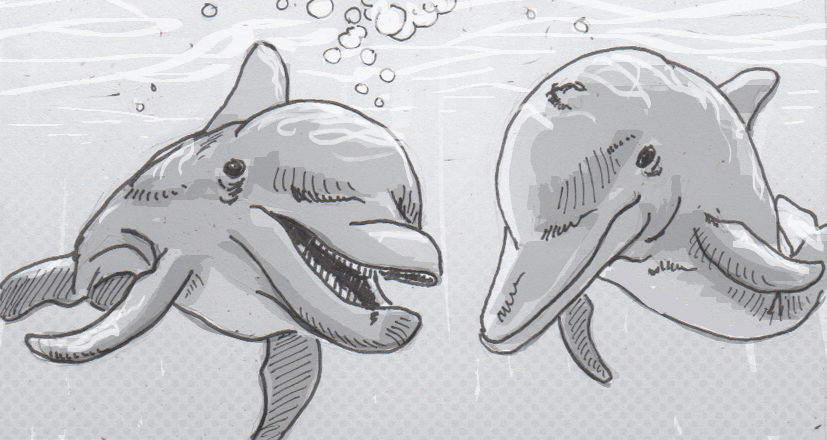 Update: It looks like this study had a number of huge holes in it, starting with the fact all conclusions were drawn from a single, 34-second recording of the dolphins vocalizations. A thorough criticism is available at Why Do Animals Do the Thing.

Many animals communicate with each other, but it’s never been clear that any creatures but humans really conversed. Even with creatures that sing or squawk, broadcasting information to your local audience is a bit different than exchanging information, sort of like the difference between posting on Facebook for “likes” from acquaintances versus texting to make plans with a specific person. Proving animals are engaging in actual conversations has been difficult, partly because some of our most likely candidates communicate in ways that hard for humans to make out, much less analyse. New audio technology may have finally broken through this barrier though, allowing us to eves-drop on dolphins for the first time.

Sorting out the sounds

The two Black Sea bottlenose dolphins, Yasha and Yana, were recorded while vocalizing in a holding tank. Normally the squeaks and clicks would get blurred together in recordings, making it difficult to pick apart any possible rhythm or logic in who was doing the talking. Researchers as the Crimean Karadag Nature Reserve conducting the study, however, found a way to keep each dolphin’s portion of the dialogue separate, revealing a very consistent pattern of vocalization that strongly resembles the rhythms of human speech.

While dolphins don’t have lips to help shape their words, they can produce over a thousand different sounds, largely thanks to anatomy that allows them to use echolocation when hunting for food. When hunting, these clicks are produced to reflect off of potential prey, but when lounging with a friend in the pool, the dolphins seemed to alter frequency and volume to form units of speech researchers compared to words. These varied pulses would then be strung together in batches up to five “words” long, like a basic sentence.

Beyond the sounds produced, the dolphins also appeared to be listening and responding to each other. When Yasha was clicking, Yana was quiet, only answering after Yasha had finished a “sentence.” There’s always a risk of anthropomorphization in a situation like this, but the amount of variation and measured turns between the two dolphins followed many rules of human speech, at least enough to warrant further analysis and possibly attempt to translate specific sounds. Between dolphin’s transmission of cultural knowledge, possible use of sign language and whistling sounds we already know to be used to communicate, it’s not actually a huge stretch to suspect dolphins of conversation with specific “words.” The bigger question may be how to politely phrase our apology for all those tuna nets when the lines of communication finally open between our species.

Source: Dolphins recorded having a conversation 'just like two people' for first time by Sarah Knapton, The Telegraph