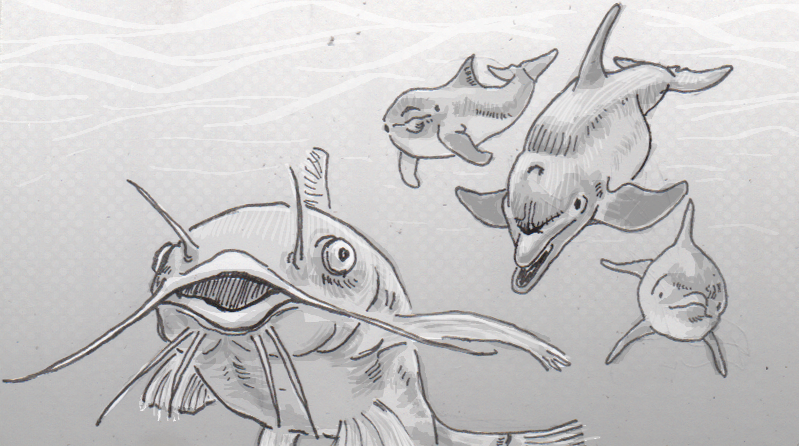 Dolphins seem to be teaching each other to decapitate dangerous catfish

While humans may find dolphins to be cute, cuddly and sitcom-friendly, other sea life probably isn’t quite so charmed. Like other predators, dolphins have specializations that help them find and secure food as securely as possible. What makes dolphins stand out is their inventiveness and apparent ability to share what they’ve learned, which can lead to amazing innovations in hunting techniques. Sometimes this takes the form of using tools to safely dig for fish hidden in the sand, and sometimes it means figuring out ways to decapitate catfish with such efficiency that the fish heads survive their grisly executions.

Bottlenose dolphins (Tursiops truncatus) in the Gulf of Mexico have been working on their catfish hunting techniques for some time, but documenting their activity has been difficult. Sporadic reports suggested that the dolphins were developing a specific formula for gobbling catfish, but a sighting in May of 2015 served as a much more dramatic demonstration of their skills. Researchers came upon a trail of catfish heads that extended for a third of a mile, clearly left there in the wake of a pod of dolphins moving through the area.

Leaving leftovers isn’t that amazing on its own, but there was a consistency and accuracy in these decapitated heads that really stood out to researchers. Instead of random tears and chomps, the heads were so cleanly removed from the bodies that some were still alive when the research boat pulled them out of the water. Eyes, front flippers and mouths were all moving enough to even try vocalizing before finally expiring on the boat. Later analysis of the fish’s skulls backed this up, indicating that the dolphins had learned to remove the heads in a swift, efficient motion faster than the fish could defend against.

The dolphins weren’t doing this to show off. Catfish have three defensive spines in their skulls that they can lock into a socket as a defense mechanism, making them not only difficult, but dangerous to try and swallow. Records of found dolphin corpses show that plenty of dolphins have suffered from improperly prepared catfish, with one specimen being found with 17 spines in it’s body that had even punctured it’s digestive tract before it died. Like other dolphins that have learned to smash octopuses before eating them, the Gulf dolphins probably started these beheadings as a way to stay safe.

As with other hunting innovations seen in dolphins, there’s a good chance that decapitating catfish was invented and shared among a dolphin social circle. It would be part of the growing list of specialized behaviors that appear to be known only to specific groups of dolphins, which suggests that it’s cultural knowledge, rather than some kind of innate behavior pattern that randomly appeared in the gene pool. This is probably pretty relatable to a human, as just about every skill we learn is learned from the people around us. The catch might just be that when we learn to clean a fish, we don’t start by beheading it with our teeth.

My third-grader asked: How exactly did the dolphins take the catfishes’ heads off?

For this question, we were fortunate enough to hear from Errol Ronje, the biologist who co-authored the study. It turns out that dolphin teeth and jaws aren’t really well-suited to sawing and cutting, as dolphins normally just swallow their food whole, so a good, hard chomp can be ruled out. Nobody has witnessed these beheadings in progress, but there were scrape marks from the dolphins’ teeth left on the fish heads that do provide a clue as to what happened.

Ronje’s hypothesis is that these scrapes were made when the dolphins gripped the fish just below their heads, then twisted and shook the fish until the heads basically popped off, almost like a farmer ringing the neck of a chicken. The dolphin’s teeth only needed to break the catfish’s scaleless skin, leaving the rest to some rather intense thrashing and spinning. Popping off heads like this may sound crude at first, but the dolphins seem to have a very precise method for this work. They not only avoid spines, but they can do this fast enough that Ronje’s team weren’t even aware the dolphins were doing it until it was over.

Source: Why These Dolphins Behead Their Prey by Michael Greshko, National Geographic