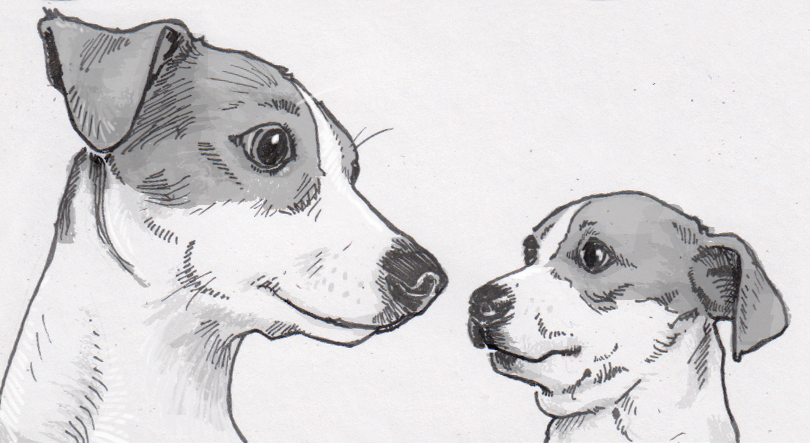 We’re currently dog-sitting a mutt that most people think looks a bit like a ten-pound Ewok. Many onlookers seem to find his small size, button nose and large, dark eyes look pleasingly puppy-like. Just about all of our neighbors have commented on how quite the little fluffball looks on walks, although I don’t think anyone actually believes that he’s a puppy. Somehow people have a sense of what a truly young dog looks like, even to the point of finding a specific age more adorable than all the rest. It may seem like looking pleasing would only provide a benefit to human breeders, but researchers have found that peak-puppiness likely boosts dog survival rates exactly when they need the most help.

In general, humans like to look at things that remind us of our own babies. This concept, called kinderschema, is so ingrained in us that adoring an infant’s chubby cheeks and bright eyes often triggers the release of hormones like oxytocin. This in turn helps us feel an emotional bond with the cute face we’re looking at, even if that face belongs to a puppy instead of our own offspring.

Researchers from Arizona State University asked test participants to rate how attractive they found photos of dogs at different ages. By limiting the photos to just a few breeds and specific poses, researchers were able to tease out which age dog triggered the strongest reactions from the 51 participating humans. They found that Jack Russell Terriers were cutest at 7.7 weeks, Cane Corsos at 6.3 weeks, and White Shepherds at 8.3 weeks old. These ages weren’t a huge surprise to researchers, because they all coincided with the age these dogs were most likely to be weaned from their mothers.

Unlike wolves, which care for their young for around two years, domesticated dogs expect their young to be independent at around two months old. The problem is that most puppies don’t really agree with this assessment, as around 80 percent of puppies don’t survive their first year when living on their own. Rather than work on their hunting skills, dogs have been shaped to as adorably baby-faced as possible at this age, enticing humans to step in and pick up where the dogs’ mothers left off.

Figuring out exactly how this arrangement fell into place is difficult at this point, but as far as we know nobody was consciously breeding their dogs to sync up weaning with being extra cute. Nonetheless, it’s now an important part of dog survival, and it’s easy to see how this concept may even play a role in some breed’s entire life. After all, being a cat-sized Ewok-impersonator probably doesn’t impress predators or prey as well as it convinces humans to share their food and homes.