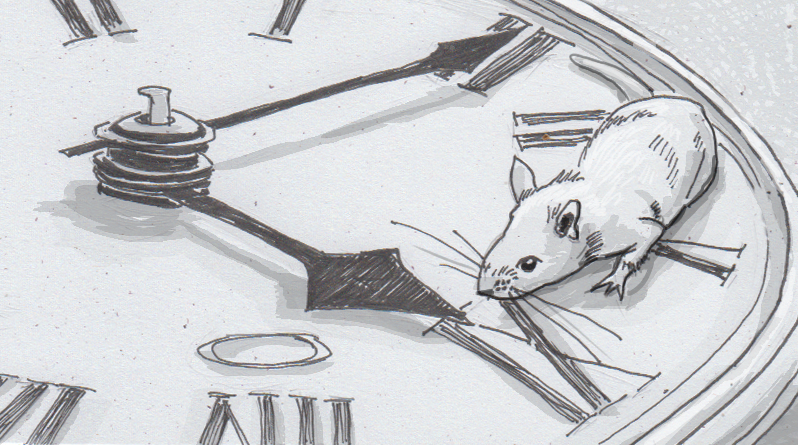 There are many parts of our bodies that are remarkably good at keeping a consistent sense of time, but our brain isn’t exactly one of them. While many cells, hormones and other physiological processes can do a decent job of counting off 24 hours each day, our conscious perception of time is much more variable. It’s been suggested that our brains perceive certain intervals as shorter or longer than reality due to our interest levels in those moments, but new research by neurologists may be closer to the nuts and bolts of why our view of time varies so much. By studying some time-keeping mice, they’ve found that dopamine levels make a big impact on how long an experience seems to last.

Studying an animal’s perception isn’t easy, so researchers had to come up with a way to get mice to demonstrate how they were experiencing the flow of time. The first step was to train the mice, over the course of a few months, to use a device with three sensors. The first activated the trial, as well as an audible tone. The mice were then tasked with identifying when a second tone came after a 1.5 second pause or before. When the mouse correctly identified the longer or shorter pauses, it was rewarded with a treat. The test then required the mice to share what they thought 1.5 seconds felt like by indicating when they thought something was too fast or too slow.

As the mice did these tests, scientists looked at brain activity in their substantia nigra pars compacta, a region of the brain known to be tied to time perception. Specifically, they watched as cells that released the neurotransmitter dopamine became more or less active. The more dopamine the brain released, the more likely a mouse was to underestimate the elapsed time, meaning it was probably feeling that the second tone came too fast. Basically, the mouse was getting that “what, done already?” feeling we have when we’ve been enjoying something, which also fits some of what we know about dopamine’s role in reward centers of the brain. Basically, time flies more when you’re having dopamine-reward feelings.

To test this relationship further, researchers tried controlling the release of dopamine more directly. Using optogenetic triggers, which uses light to activate specially developed brain cells, scientists were able to trigger dopamine production with the flip of a switch, so to speak. As expected, when the dopamine was artificially triggered, the mice’s actions aligned with someone who was suddenly experiencing time faster, underestimating durations between audio cues in the test. This isn’t to say that dopamine is the only ingredient to how we perceive time, but it likely plays an important role in how time shifts so much depending on our enjoyment levels.

Source: Neurons that control judgment of time discovered in the mouse brain, EurekaAlert!