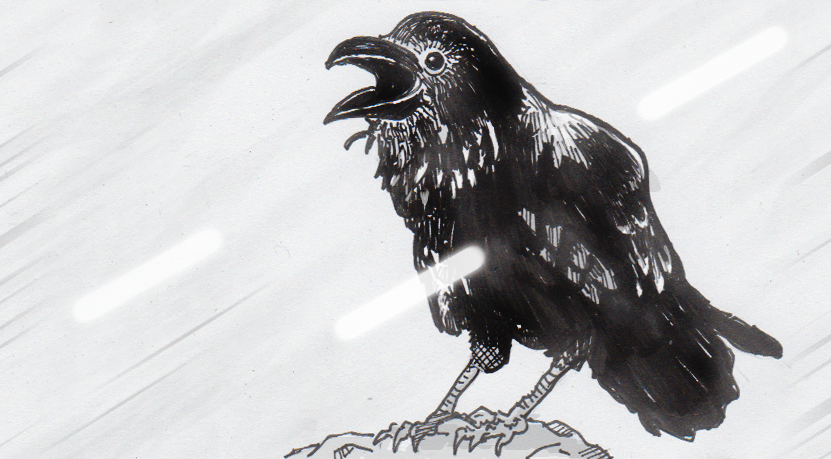 How do you fight some of the smartest birds on the planet? Birds with proven problem-solving skills, excellent memories and the possibility of cultural learning? If those birds are taking advantage of changing environments while decimating the population of an endangered species, the measures necessary may seem extreme, but the approaching being tested now is simple: shoot laser guns at them.

The lasers, while fired from rifles designed to fight human pirates in the Indian Ocean, don’t actually harm their targets. The rifles shine green light intended to dazzle their target, in this case a raven, so that they learn that their current location is an unpleasant place. If all goes according to plan, the ravens will learn and then share this knowledge with each other, cutting down on their visits to a large composting facility near the Mojave River. This isn’t to say that no precautions are being taken, as the biologists conducting this test need to be careful to not dazzle any nearby drivers or pilots, but the narrow focus of a laser makes annoying only the intended ravens much easier.

Using technology to undo the effects of our progress

The goal behind all this is not to protect a compost pile. It’s actually to help protect Gopherus agassizii, a very endangered species of desert tortoise. These tortoises have faced threats from a number of directions, most of them related to humans changing their environment. Disease has played a factor, but development of their habitat in California has been an issue, both directly and indirectly. Aside from obvious things like paving over parts of the desert, human development has also been a boon to predators of young tortoises, namely the ravens.

The ravens have done a great job at making use of human activity. They enjoy our discarded food, additional irrigation and water features, orchards of fruit and more. Even telephone poles have provided safe roosting locations in areas where that wasn’t previously possible. The aforementioned compost site is just another example of an inadvertent raven buffet humans have opened up, and the lasers are being investigated as a humane way to control the birds.

Rather than poison or shoot the ravens, driving them away from such an easy food source will hopefully slow their population growth, which would otherwise get a boost from such easy nutrition. The reprieve is thanks to lawsuits, protection as a migrating bird, plus a certain amount of charisma possessed by intelligent animals like these members of the corvid family. If the ravens can be controlled this way, the lasers can’t protect all the affected tortoise territory, but it might be able to help at more sensitive sites. These include centers were young tortoises are raised in a protected space until they’re old enough to withstand repeated pecking and avoid being scooped up as a raven’s meal.

The results look good so far, but there’s a big question about the ravens’ social learning. Even if you drive some ravens away with irritating lasers, how long will the group remember that lesson? Hopefully the birds’ intelligence will help make the whole program practical in the long run, because the biologists probably aren’t having that much fun sitting out in the desert shining lasers around. Maybe.

Source: Hazing Ravens With Lasers: A Humane Way to Save Baby Tortoises? by Chris Clarke, KCET