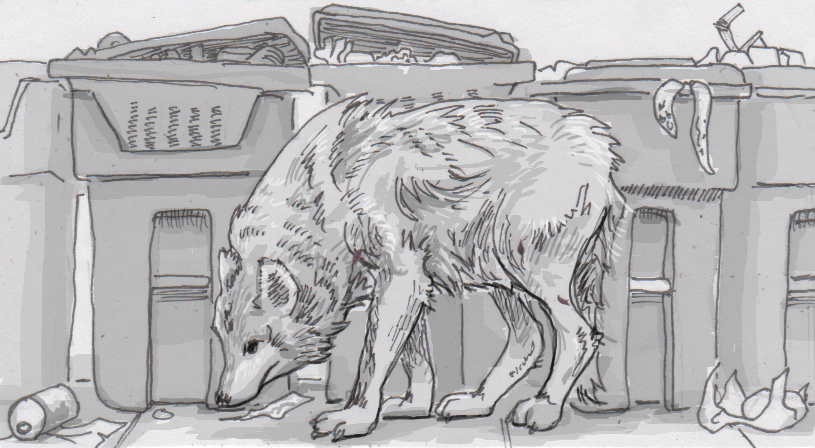 Canids the world over seem to be testing the idea that “you are what you eat.” Now, this isn’t to say that coyotes, dingoes and wolves are in the process of transmogrifying into deer or rabbits, but that act of securing and eating particular foods is fundamental to these species’ identities. Eating deer makes a different impact than eating rodents, which is different still from dumpster diving for human leftovers. It’s also significant that all these shifts in canid hunting behaviors is likely due to humans, just like the last time it happened 30,000 years ago.

Biologists have been tracking the diets of coyotes and eastern wolves in the United States, particularly as it relates to predatation. Wolves (Canis lycaon) normally prey on larger hooved-mammals, or ungulates, such as white-tailed deer and moose. The large animals provide enough calories to make it worth the effort to the wolves, and the wolves help keep prey populations in check. However, humans have killed off so many wolves wildlife managers had to hope coyotes (Canis latrans) would step up and fill the void left by their larger cousins. After all, deer populations still needed balancing even if there weren’t wolves around to do the job.

What’s been found is that coyotes aren’t interested in that kind of work. Taking on larger game is much more work for the relatively smaller coyote, and as a more generalist feeder, they have easier options to fill up on. Why bother with a white-tailed deer when there are rabbits, squirrels or human garbage to dine on instead? This works out fine for coyotes, but by being uncoupled from larger prey deer populations are out of whack, overcrowding some areas while being absent from others. It seems that the top predator of this food chain isn’t easily replaced.

Wolves don’t realize this responsibility of course, and some populations have started straying from their usual predatory roles. Around the world, wolves have been observed depending increasingly on domesticated livestock, scavenged carcasses and human food waste as sources of food. These food sources haven’t completely erased hunting from the wolves repertoires, but there is a real possibility that they’re heading in that direction.

The most recent example of such a shift was seen in a population of wild dingoes (Canis dingo) that were living off of human foods from a waste processing facility. Those dingoes started traveling less, formed larger groups started showing food preferences akin to domesticated dogs. Most importantly, this isolated the dingoes from other populations, leading to genetic differences that could eventually lead to the creation of a new species, assuming they could maintain isolation from their more feral kin.

If this all sounds familiar, it’s because these are the sorts of scenarios that have been theorized to be the origin of domesticated dogs. These populations of dingoes and wolves might never become that integrated with humans, but there is concern that human activity, including culling, developing over natural habitats and leaving our garbage out, is pushing these predators out of their natural niches. Aside from the impact that garbage-fed canids have on unchecked prey populations, it may also lead to more casual contact with humans that are sometimes unsafe for either party. Besides we have plenty of lovely dogs around already— there’s really no good reason to unintentionally create dog 2.0.

Source: The redomestication of wolves, Scienmag