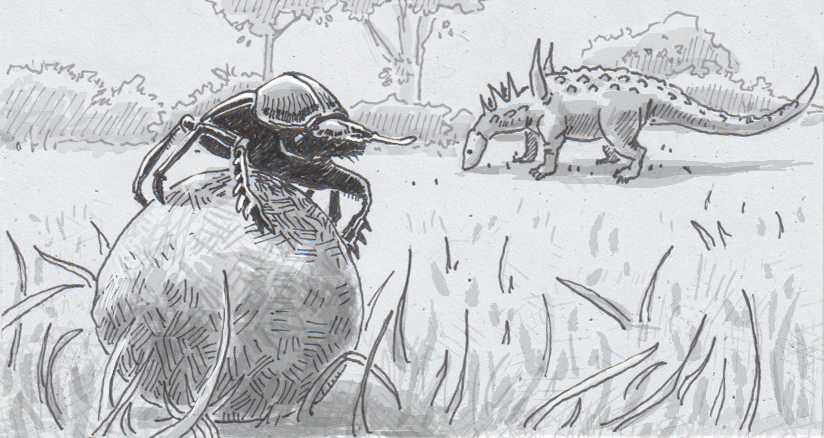 Dung beetles today famously scurry around the world, collecting other animals’ poop to both eat and lay eggs in. Many species today have a preference for the feces from herbivorous mammals like cows or elephants, which, with just a hint of self-importance, gave us the idea that the rise of mammals lead to the evolution of dung beetles. However, new analysis of the beetles’ DNA indicates that mammal poop has not always been the center of these insects’ universe, and that instead they got their start by rolling balls of dinosaur poop, 115 million years ago.

The new timeline for dung beetle evolution was made by comparing 450 beetle species, with 125 of those representing scarab beetles, the taxonomic family dung beetles belong to. Following how these various species diversified, researchers pushed the first true dung beetles back some 30 million years from previous estimates, meaning they came into their own in the Cretaceous period, an idea backed up by some evidence of beetles in some coprolites. There were plenty of dinosaurs and mammals alive at that time, but neither group seemed be undergoing a significant change that would have helped spark the advent of dung beetles at that point. However, that time does match the rise of angiosperms, or flowering plants, which is probably what got the beetles’ ball rolling.

The advantage of flowering plants to bugs that eat poop might not be clear at first. The key is that dung beetles’ diet depended on whatever the dinosaurs were eating. Before that point, various scarab beetle ancestors were probably dabbling in dinosaur poo, but thanks to the tough and often woody plants involved, couldn’t really make it the centerpiece of their diet. Once flowering plants evolved, those were eaten and pooped out by dinosaurs, and then offered the beetles more nutrition and less difficult fiber to work through, which was an enticing enough package to get some beetles to really specialize in collecting and eating scat.

As we all know, this relationship couldn’t last, as most of the dinosaurs were wiped out around 65 million years ago. As you’d then expect, some species of dung beetle were likely driven to extinction at the same time, unable to find their preferred food sources after large herbivores died out. The surviving lines of dung beetles then probably came from ancestors who had diversified their menu slightly, working some mammal poop into their diets, rather than being strictly devoted to dinosaur droppings. As mammals came to dominate many ecosystems, that flexibility paid off, and with species diversifying once again.