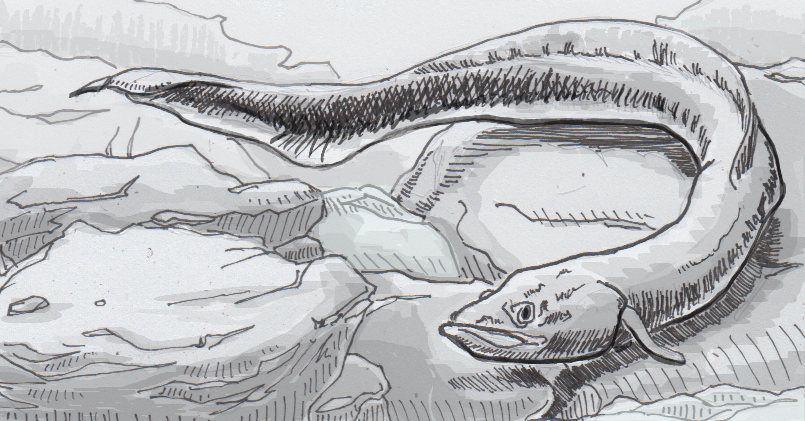 During migration, European eels abstain from eating anything but themselves

A long journey can be transformative. By venturing into new territory, facing new challenges, and hopefully growing and learning along the way, people can feel like something as simple as a road trip can change their view of the world. European eels take a lot of these ideas literally, starting massive migrations across the Atlantic Oceans, reaching maturity and arriving at the Sargasso Sea nearly unrecognizable compared to when they left the shores of Spain and France. Some of that might be tied to life lessons or developing their character, but a lot of it is because they’ve had to eat a portion of their own skull to survive the trip.

European eels (Anguilla anguilla) normally dine on small molluscs, crustaceans and fish, even doing a bit of scavenging if the opportunity presents itself. They normally feed nocturnally, and will hide in crannies or burrowed in mud during the day avoiding confrontation with larger predators. If things are really rought, they’ll even spend a bit of time on land to scrape together a bite to eat. This all sounds like a fine plan for staying fed in the eels’ native estuary environment, but when young eels head out to sow their wild oats, their dining habits change dramatically. For the entire, 3,000 mile-long haul across the ocean, European eels basically stop eating altogether.

To survive the migration, the eels start cannibalizing their own bodies, primarily focusing on stripping nutrients and minerals in their skeletons. This is a strategic process, which notably leaves crucial structures around the spinal cord protected, while shaving down other parts of the skull and spine. So while the juvenile eels that start out with thicker bones, the eels that arrive are likely to have 50 percent less bone volume in their heads, and 65 percent less in their back bones. If that weren’t enough, this period is also the equivalent of an eel’s puberty, as they’re sexually maturing during this same trip so that they can spawn when once they arrive in the Sargasso Sea.

Some of these details are slightly speculative, because at only 2.3 feet long, planting tracking devices on the eels might be too burdensome for resource starved animals during migration. Instead, eels were given hormones in a lab, then observed swimming through a sort of aquatic treadmill. Part of this research was to learn more about these critically endangered eels, but there was also interest in studying how there bone loss works. Special cells called osteocytes break bone tissue down to reprocess it, and scientists want to learn how that process works so that it can possibly be reversed in humans suffering from osteoporosis. There aren’t a lot of lab-compatible animals that exhibit this kind of bone loss, and so the eels may prove very helpful in understanding how human bone loss works. In the mean time, maybe make sure to bring some extra snacks on your next road trip, just to be on the safe side.