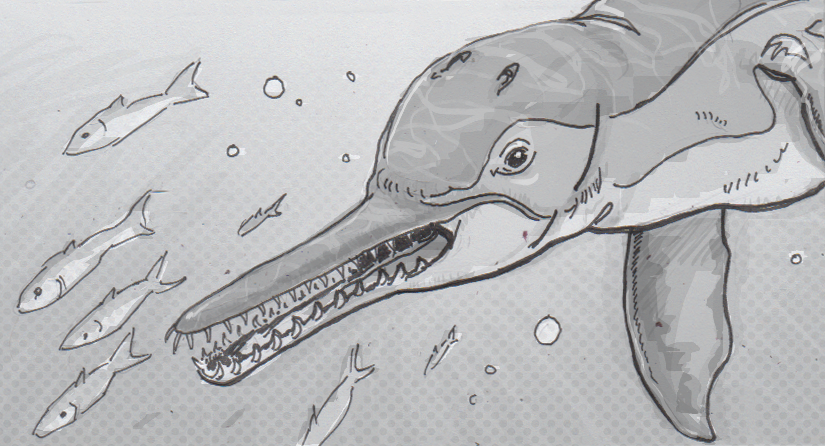 If asked to describe a whale, you’d probably start thinking about fins, flukes and blowholes, completely overlooking a piece of anatomy that seems to have been crucial to cetacean evolution. Ancient skulls indicate that whale ears were highly developed very early on, probably allowing for echolocation under the sea as far back as 27 million years ago. Earlier ancestors as far back as 60 million years seem to have started down this road, but the ears of the recently Echovenator sandersi were specialized enough to pick up the ultrasonic frequencies necessary to hunt with sound.

It’s thought that early whales were all toothed hunters, and so those animals needed to actively hunt their prey. To hunt in murky sediment, like some dolphins do today or to dive to the dark depths traveled by modern sperm whales, an alternative to sight was needed. Similar to bats, echolocating whales and dolphins emit high-pitched squeaks and clicks, then map their environment according to how those sounds bounce back off of mud, rocks, fish or squid. Since the clicks are generally created by fatty tissue at the front of the animal’s head, sometimes called the “melon” or “junk,” it’s harder to find evidence of it in the fossil record. Fortunately, ear canals in a skull can be analyzed to see how well their owner could have heard sounds at a high enough pitch to navigate by.

High-pitched sound is critical because it provides much better resolution about a whale’s environment. The sounds don’t hold up huge distances underwater, but they to reflect small nooks and crannies with great precision, giving the hunter very detailed feedback about their potential meal. High-pitched sound also stands out over background noise in the ocean, making it that much easier to focus on prey amongst other distractions.

Conversely, low frequency sounds don’t pickup detail, but they travel great distances. For this reason, many large whales that don’t rely on echolocation do still rely on sound sound, but for long-distance communication. Rather than focus on high-pitched clicks and squeaks, blue whales can hear sounds down to 10 Hz, below what a human hear can even perceive. While they might not be able to hone in on a specific squid with these larger wavelengths, they can instead hear their family member alerting them to where the next batch of krill can be found.