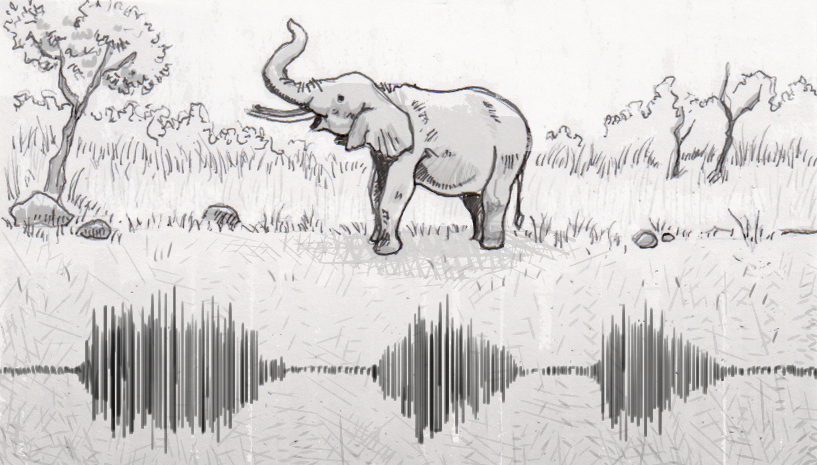 Eavesdropping on elephants with equipment designed to detect earthquakes

From three feet away, an elephant’s trumpeting can sound as loud as a construction site. At 110 dB, these calls are loud and distinctive, but they only make up a small portion of how elephants can communicate with sound. Their vocal range is enormous, stretching from a rumbling 27 Hz to a piercing 470 Hz, much of which is easily missed by a human listener. To really tune into what elephants may be communicating, researchers are now proposing that we do more of our listening through the ground, even if it means employing seismic sensors meant for earthquakes to do so.

This investigation started with the idea that elephants already make use of the ground to communicate with each other. Like the low-pitched song of a blue whale that carries across the ocean, elephants seem to use the ground like a giant microphone to send low-pitched sounds across long distances. While many of their complex calls sound impressive in the air, low-pitched vibrations are transmitted much further in dense earth and rock. So while it may be annoying when the bass notes from your neighbor’s stereo rattle your walls so easily, elephants make use of the ground as a transmission line for long-distance communication.

Listening in with seismic sensors

Researchers are hoping that humans will soon be listening in to these calls as well. Using sensors developed for monitoring seismic activity associated with earthquakes, they’re now investigating how to remotely monitor elephant activity. Starting with cataloging vibrations and directly observed behaviors, researchers aim to keep track of what a herd is doing from miles away. This won’t only let us observe elephants in a less obtrusive manner, but may also help with conservation, as herd panicking about threats like a poacher should be detectable, triggering the immediate deployment of local law enforcement to that location.

There are some complications to be worked out before we start eavesdropping on the world’s pachyderms. Certain types of terrain seem to limit the effective range of our underground listening stations. This work is has also drawn attention to sources of noise pollution, such as heavy vehicles. This kind of human activity makes listening in on elephant calls much more difficult for our sensors, which means that its probably disruptive to the elephants as well, similar to the way large ships’ engines interfere with whale call and navigation in the ocean.