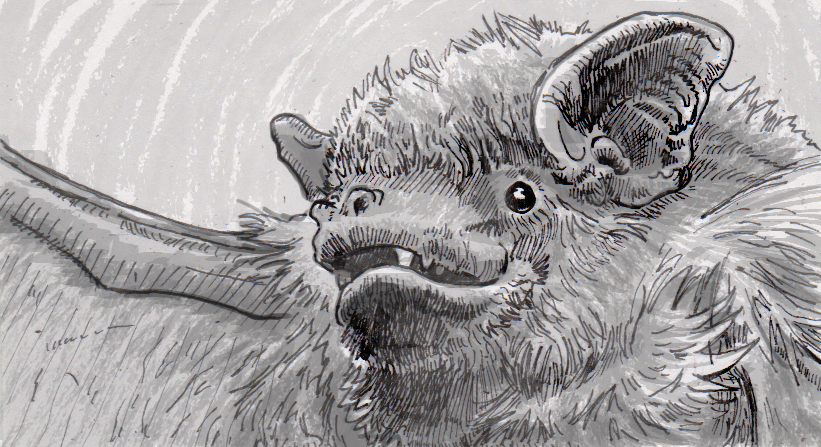 One of the best things a nocturnal animal can do to hide its location is to stay quiet. For example, the cats soft feet and owls’ fringed feathers allow these predators to approach their prey in near silence, keeping their approach hidden for as long as possible. Of course this strategy is a lot to expect from bats though, as echolocating species depend on making sound to not only find their prey, but navigate around obstacles in the dark as well. Nonetheless, difficult doesn’t mean impossible, as some bats have been found to purposely reduce their sound “footprint” in order to better mask their locations.

Barbastelle bats (Barbastella barbastellus) like to hunt a variety of insects, including tiger moths. After generations of being eaten by bats, these moths have evolved hearing ranges that let them detect and even interfere with bats’ echolocation calls, making it harder for the bats to surprise their targeted prey. To compensate, barbastelle bats have learned to turn down the volume on their echolocation squeaks as they approach a moth. To figure out exactly how much effort the bats put into this strategy, researchers attached a microphone over a bait-moth in the forest, allowing them to record exactly what prey would hear as a bat attacks.

Since the relative loudness of sound greatly increases with distance, the bats have to be very careful in how they modulate their voices. To keep the moths in the dark concerning the bat’s approach, the bats lower the volume of each squeak just the right amount to make the sound stay consistent to the listening moth. So the moth can certainly hear the bat’s echolocation, but it won’t sound like it’s getting any closer. The bat isn’t hiding its presence, but it does hide its location well enough to get the drop on its prey.

Navigating without being noticed

Hiding an attack on a moth is one thing, but what about bats that want to hide from other bats? This is apparently a concern of hoary bats (Lasiurus cinereus) migrating for mating season, who want to go and find potential mates without attracting unwanted conflict from rival suitors. Obviously, these bats are quite well attuned to the sound of their own species, which is probably why the bats revert to navigating with what researchers are calling ‘micro-calls.’

These super-soft squeaks are three orders of magnitude quieter than most echolocation, making the bats’ voices nearly inaudible. The catch is that these quiet bats are also nearly flying blind, as their echolocation is only able to report on their immediate surroundings. In an experiment, mist nets were set up on a bat migration routes in norther California, and the bats only seemed to notice the nets at the last second. Despite a few full-strength squeaks to assist with evasive maneuvers, many of the bats still collided with the net, indicating that flying in “stealth mode” carries a degree of risk for the incognito bat.

While there hopefully aren’t too many nets set up on the bats’ migration routes, there are wind turbines. The bats relying on micro-calls are much less likely to avoid the spinning blades of the turbines, thanks to their reduced range of “visibility.” They’re also less likely to be detected by conservationists, who have generally relied on the sound of full-throated echolocation to determine where to build turbines in the first place. Knowing that those checks may have missed these very quiet bats will hopefully shape future conservation studies, possibly driving the adoption of alternate methods of bat detection. Just don’t tell the moths about it.