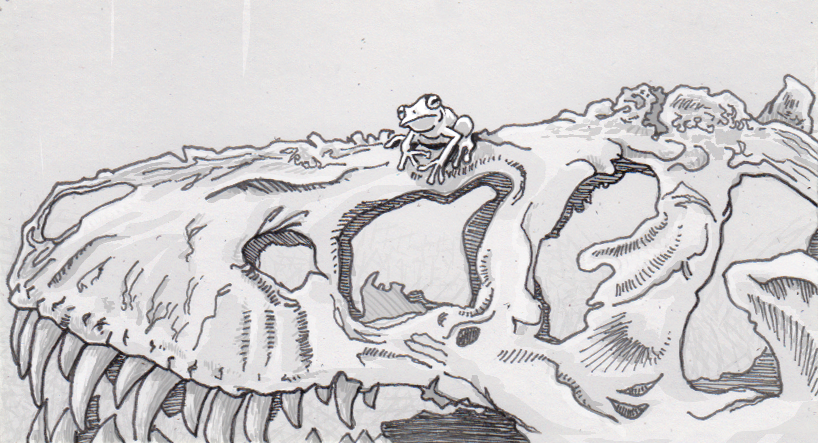 Mass extinctions can apparently be great, as long as they’re someone else’s extinction. The odds aren’t favorable in the case of an ecological collapse that could lead to the total destruction of a huge range of life forms at once, but like any long-shot, the payoff can be big. Surviving lineages can spread to new territories, diversify into new species, and essentially rule their dominions for millions of years… at least until the next mass extinction.

The extinction event usually associated with dinosaurs is the one that wiped them out at the end of the Cretaceous period, but they had previously survived a different collapse earlier in their history. The first dinosaurs evolved around 240 million years ago in the Triassic period, but they didn’t immediately dominate their world. Moderately sized spices like Nyasasaurus parringoni lived in the shadow of predatory Rauisuchians, a group of reptiles that closely resembled dinosaurs, but didn’t survive the disaster that shook the world 200 million years ago.

Recent samples of mercury in rock layers around the world suggest that the Triassic period ended with enormous volcanic eruptions all around the super-continent, Pangea. Intermittent eruptions flooded around 4.2 million square miles of terrain with lava, but it was the accompanying smoke and ash that likely caused ecosystems to collapse. Smoke could have done everything from hiding sunlight for plants to raising the acidity of the oceans, all of which proved too difficult to survive for as many as 76 percent of the world’s species. Among the survivors, dinosaurs were able to take over new niches, eventually taking over the world as everything from feathered birds to mountainous herbivores.

Dinosaurs were able to enjoy the opportunity presented by the Triassic’s period of volcanic activity for millions of years, but nothing lasts forever. Famously, an asteroid struck the Earth near the Yucatan Peninsula 65 million years ago, creating waves of devastation fairly reminiscent of the extinction event that first put the dinosaurs on top of the food chain. In this case, the only dinosaurs to carry on were the precursors to today’s birds, but they weren’t the only survivors. While mammals arguably benefited from the end of dinosaurs’ reign the most, researchers recently confirmed that frogs were also big winners.

Genetic studies of modern frog species found that 90 percent of today’s frogs evolved from just three lineages. That genetic bottleneck was traced to the same extinction event that wiped out the non-avian dinosaurs. However, frogs were apparently well positioned to take advantage of the newly-reset ecologies, and quickly diversified into new niches and species. For instance, some families of frogs moved into trees for the first time, while others evolved to live most of their lives on dry land, giving up the tadpole stage of their development.

Researchers are digging into the three lineages that survived the asteroid’s impact 65 million years ago in order to see what got them through that difficult time. Frogs are already known to become dormant underground when resources are stressed, but it’s not clear if that was what got them through fire, brimstone, cold, and worse. They want to know if there was some shared trait that made those frogs extinction-proof, and how well that resilience may have stuck with our amphibians today.

Source: How Frogs Benefited From The Dinosaurs' Extinction by Merrit Kennedy, The Two-Way