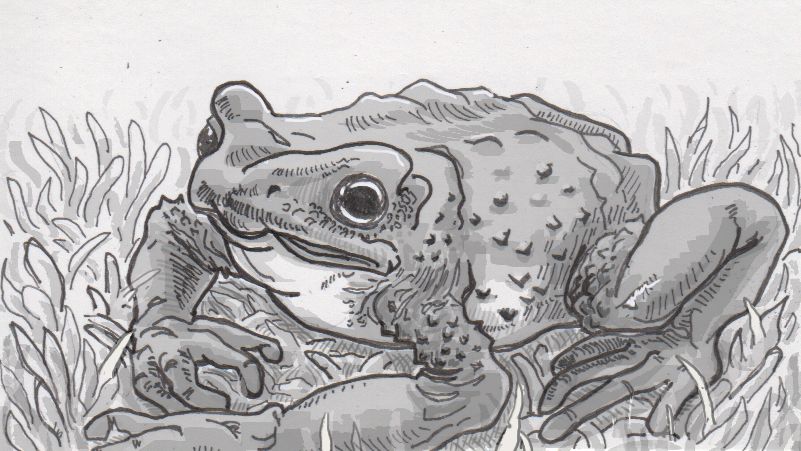 It may be time to start paying closer attention to the critters my kids find in the yard. I don’t think there are any nearly extinct species living on our street, but then again, biologists from the Jambatu Canter for Research and Conservation of Amphibians didn’t have high hopes for Jambato harlequin frogs either when they issued a reward for their recovery. The frogs hadn’t been seen for 30 years, and yet somehow an elementary school student managed to track down enough individuals to kick off new breeding efforts and possibly save the species.

Jambato harlequin frogs (Atelopus ignescens) were once found in forests from Ecuador to Columbia. The small frogs only grow to a couple of inches long, and may not look like much at first glance thanks to the dark coloration on their backs. This is in contrast to their bright orange bellies, which earned the frog a name that is Latin for “to catch fire.” While they were once fairly common in humid areas, their population began to decline in the early 1980s, and with the last confirmed sighting in 1986. As far as anyone could tell, Atelopus ignescens had gone extinct, possibly due to habitat loss or the spread of chytridiomycosis, a disease that has been plaguing amphibians around the world.

In 2016, researchers offered a reward for Jambato harlequin frogs with no real expectation that anyone would find one. It was thought that the reward would be a good way to catch people’s attention, and show how an animal that had once been so common was still vulnerable without protection. In a sort of happy reversal, the reward spurred a young boy to bring in a group of Jambato harlequin frogs he’d found near his house. 43 individuals were captured, and work immediately began to try to boost the amphibian’s numbers in a captive breeding program.

It will be some time before this next generation of frogs can be released into the wild, and their population is still precariously small. Everything from mating enclosures to tadpole food are being tested to give these frogs a shot at stability. In the mean time, the boy who found them is putting his prize money towards his education, having unexpectedly revived a scholarship for conservation work.