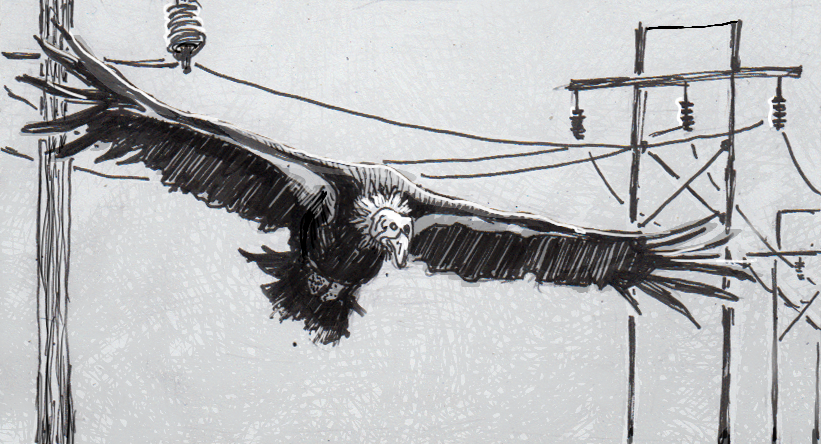 Bigger isn’t always better, at least for California condors (Gymnogyps californianus). Sure, having a 10-foot wingspan allows these huge birds to soar at speeds over 50 miles-per-hour while looking for food, but the size of these scavengers can become a liability as well. The critically endangered birds are so large, they’re more prone to problems with power-lines, as their large wings can easily complete a circuit by touching two lines at once. To keep the delicate population growing, a number of measures have been enacted to keep these scavengers soaring, preferably away from sources of electricity.

In the few decades since condors have been getting re-released into the wild, at least five birds have been electrocuted from contact with power lines. Since even today there are fewer than 500 birds alive, losing five in a preventable way was worth addressing. Three of those deaths were clustered in a particular range near Big Sur, California, where power lines ran east-west across their flight paths. The chosen solution was to remove 13,000 feet of lines from poles and bury them instead.

This solution was obviously not reproducible every else the condors might travel. A more long-term, and theoretically robust goal has been to train the birds to avoid power lines in the first place. Normally, California condors search for food by soaring high in the sky until they see a carcass, or other animals eating a carcass. They’re not used to looking forward to avoid power lines, much less know to keep their wings from touching two at once.

To help catch the birds up with modern conveniences, special, low-wattage power-lines were built in condors’ enclosures. The lines delivered enough electricity to be painful without causing injury, for the goal of training the birds to avoid power-lines and utility poles altogether. Conditioning a bird before its release is helpful, but the real hope is that these birds will raise their young to avoid the power-lines as well. Since these efforts began in 1994, electrocution has thankfully been on the decline among condors.