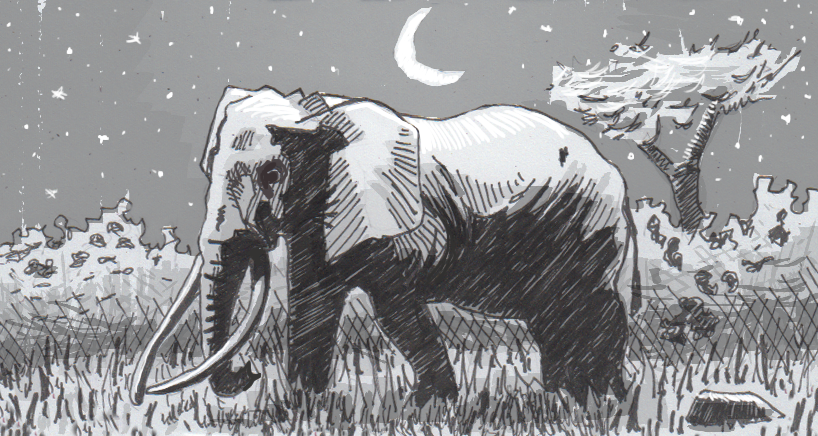 With the recent revelation that African elephants may get by on only two hours of sleep a day, I can’t decide if I feel jealous or sorry for the tireless beasts. On the one hand, my current schedule would certainly feel more functional if my brain required less sleep. On the other hand, sleep feels great, although I realize that opinion may just be a product of my smaller, omnivorous lifestyle, which couldn’t possibly function with so little rest. If it weren’t for horses and giraffes, this study would seem completely broken.

The elephants’ sleep data was not easy to collect. Sleep is normally monitored not by closed eyes, but by tracking brain wave activity with electrodes placed on the outside of the head. This works for many heads out there, but elephants are so large that their skulls block the signal too much, which required a bit of creativity on the part of researchers. With traditional measurements out, they outfitted two older females with collars carrying gyroscopes and motion trackers on their trunks. The collars would then detect when the elephant lied down, and the motion of the trunk could be used as a proxy for the elephants’ activity level. If the elephant’s trunk was still for more than five minutes, it was assumed that the pachyderm was sleeping.

Sleep schedules at the end of the known spectrum

The tracking then revealed an extreme sleep schedule, beating previous record holders. A batch of other large animals were already known to sleep for a few hours a day. Giraffes and horses were thought to be the extreme, sleeping for only around two-and-a-half hours a day. The tracked elephants went even lower, getting two hours of sleep in most 24-hour periods, but also sometimes forgoing sleep altogether for 46 hours, with no extra sleep afterwards to help recover. These schedules may be tied to these grazing animals’ need to constantly be looking for their relatively low-calorie food to power their huge bodies, but the elephant data found other influences as well.

Before the elephants pulled their double all-nighter, something seemed to spook them. Researchers aren’t sure if it was a rogue bull elephant, poachers, or a threatening group of lions, but it not only kept the elephants from going to bed, but also spurred them to take an 18 mile walk, skipping their usual 1:00 to 6:00am rest period. It’s not clear how regular such an occurrence might be, but it points to how important gathering data from wild animals can be, since this pattern would never turn up in captive animals.

When does Dumbo visit dreamland?

Finally, the last big questions from this study concern the concepts of sleep itself. Most of time the elephants were asleep was spent standing up. However, for the times when they were presumably dreaming, or REM sleep, they had to lie down, as dreaming interferes with muscle movement. This type of sleep happened even less frequently than normal sleep, with the elephants heading off to dreamland briefly once every few days. This is confusing, since REM sleep is thought to be a time when our brains consolidate and process memories. It seems like elephants should then be at a disadvantage, but elephants’ reputation for good memories is well deserved. It’s not clear how they seem to do just fine while on a schedule that would leave a human’s neurological functionality in tatters.

There is a chance that the elephants were sneaking in more micro-naps that weren’t detected by the motion sensors. Even if that’s true, it doesn’t answer the lack of REM sleep, which raises questions about how sleep works in elephants, and other species as well. If we can understand how these animals make such extreme schedules work, it might help us understand the sleep our brains a bit better as well.

Source: The ultimate power nap: Researchers use 'Fitbits' to track elephant sleep in the wild, Phys.org