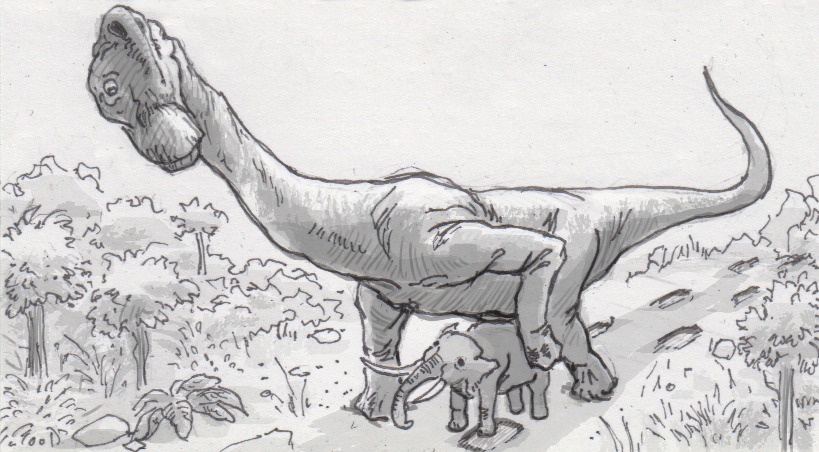 To understand how extinct dinosaurs functioned in the world, paleontologists often look to living animals for examples of how similarly built creatures put their modern anatomy to use. For example, the thick, columnar legs of an elephant seem like a good reference point for how ancient sauropods might have lumbered around.  Looking beyond bones, researchers are thinking that modern elephants can also be a reference point for trace fossils, like footprints made back in the Mesozoic era. While sauropod dinosaurs haven’t shared a direct ancestor with elephants for over 100 million years, the hope is that the similarity in their ecological niches as giant herbivores will carry over into other aspects of each animal, right down to the bottom of their feet.

In South Korea, a fossilized footprint revealed a very specific similarity between elephant and sauropod feet. The trace fossil footprint was covered in a sort of honeycomb-shaped pattern, as soft mud crept into the cracks of the dinosour’s feet way back in the Cretaceous period. The resulting texture shows the dinosaur’s feet were covered in hexagonal scales across their soles, looking strikingly similar to the natural tread found on an elephant’s feet. It’s hard not to assume that this was a case of convergent evolution, with both large herbivores evolving the same “solution” to keeping thick, heavy limbs from slipping as they walked through soft soil or wet mud.

Inferring size from a foot’s impression

A second study looking at sauropod footprints wasn’t focused on the texture of the dinosaur’s soles as much as what those prints could tell us about the animal as a whole. Starting with the simple premise that heavier animals will make deeper footprints, researchers measured fossilized tracks and then simulated the forces that would be needed to make different sizes of footprint. Once a match could be made between simulated feet and the depth of actual fossilized prints, researchers could then calculate just how much the original sauropod must have weighed to sink that far in the soil.

To validate this method, they turned to elephants as the closest living approximation for extinct sauropods. Researchers used the same techniques developed around fossilized prints on fresh elephant footprints, since they could then verify the living elephant’s weight. In the end, the simulated footprints weren’t perfect, but with a margin of error of around 15 percent, they were at least as close as other methods for estimating dinosaur mass. For example, estimates for a dinosaur’s size may be made calculating the animal’s volume based on bone sizes, which in turn is often based on living animals as reference points. The hope is that estimates based on footprints can be refined to become more accurate, particularly in regards to the physics that control soil movement.

Other researchers question the validation aspect of this technique though, since we can’t be sure if elephants really are the best reference point for animals that could grow to be close to 100 feet long and probably weigh ten times more than the largest living pachyderm. Differences in leg movement, for instance, could change how weight is distributed across a dinosaur’s heels and toes, which could affect how deep a foot presses into the dirt. These critics aren’t advocating that giraffes or rhinos would necessarily be a better model organism, but that we should be careful about assuming too much about how sauropods were built and moved, even if their feet now seem so familiar.

Source: Can fossil footprints reveal the weight of a dinosaur? by David Moscato, Earth Magazine