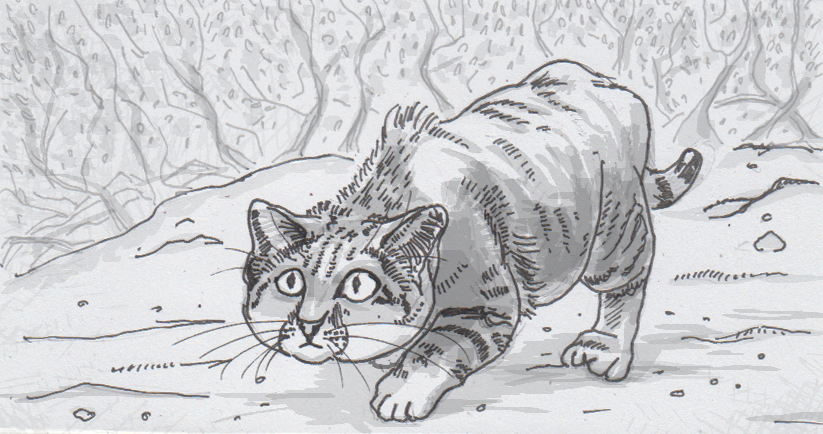 The Arabian Peninsula isn’t an easy place to live. Hot days, cold nights and little water make for a fairly inhospitable environment. Some animals, such as the Arabian sand cat, still take a shot at life in the dunes, but even under the best conditions never really thrive compared to populations of predators in other environments. In recent decades, conservationists were growing increasingly worried as the smaller numbers of cats seemed to be shrinking even further, with estimates going as low as 250 individuals left in the wild. Now a few camera traps have turned up good news, spotting three of the elusive felines in the wild for the first time in ten years.

Outside their desert habitat, you would probably be hard pressed to tell a sand cat (Felis margarita harrisoni) apart from a kitty you’d take home from the animal shelter. The pale brown cats grow to around a foot tall, weighing around four to eight pounds. They also have some subtle adaptations to life in the desert though, starting with a digestive tract that can extract all the hydration they need from the small lizards and nocturnal prey they catch, rather than dedicated water sources. They also utilize their hair in ways that makes getting the the desert’s heat easier, but it makes them much harder to keep track of.

During the day, sand cats typically bury themselves in the sand, both for camouflage and for a bit of insulation from the sun’s heat. The long hair on their ears and foot pads helps keep hot sand from irritating sensitive skin, but it can also brush away footprints in the sand, making them very hard to track. Some people were reporting sightings from time to time, but it took baited camera traps to actually confirm the cats were still active in the wild.

Confirming a need for conservation

The documented sightings all took place after midnight on moonlit nights. This suggests that the cats greatly prefer to hunt when temperatures are lower, and when their night vision may give them an edge over their prey. 46 photos confirmed the presence of three individuals, two females and a male. This might seem like dangerously low numbers, but with the elusive nature of these cats there are likely more that just never approached the chicken-flavored cat food set near the cameras.

Even with this confirmation of wild cats, the species is still technically “threatened,” with the biggest worry habitat loss. With this recent success, researchers plan to search further for the fuzzy predators, hopefully being able to map out appropriate conservation measures to keep their small numbers intact.