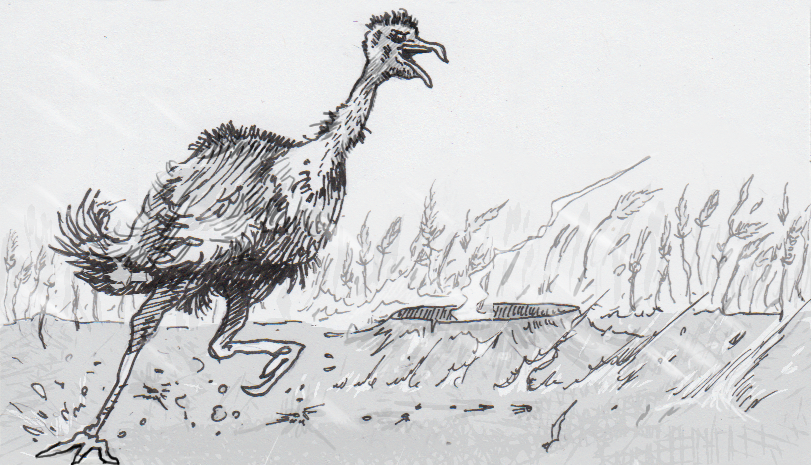 On a trip to the zoo today, my two-year-old and I got to see three emus from about 15 feet away. The tall, flightless birds walked slowly towards us while I tried to hype them up to my son, mentioning that they grew to be larger than me! And could run up to 31 miles-per-, er, as fast as a horse! This didn’t really grab his attention somehow, which makes me think he needs to see a horse running in person. The guide then mentioned how much they’re like ostriches, but with a “milder temperament,” which wasn’t the most exciting description for a small child either. It is noteworthy though, since their native land of Australia once felt the need to declare War on them, which doesn’t seem like the kind of thing you do with docile animals.

The emus temperament wasn’t really the issue in the Great Emu War, however. As with some other farming-related mishaps, Australian farmers found themselves at odds with animals interested in making use of food grown on their land. In this case, wheat was not completely harvested by the time the emus were migrating inland, which suited the emus just fine. While the birds can be over six feet tall and have very powerful clawed legs, they’re not interested in eating things larger than an insect. This meant that the farms looked like a roadside buffet to the emus, but otherwise they’re not really a threat to humans who give them space. But between the lost crops and destroyed fencing, the farmers had had enough. This was to be a War for territory and resources, and the farmers managed to pull in some serious resources to help them repel the birds.

Three soldiers, 10,000 bullets and twice as many birds

In 1932, Major G.P.W. Meredith of the Seventh Heavy Battery of the Royal Australian Artillery was sent with two machine gunners to try to clear the farmland of emus. Emus were obviously killed, but not as easily as the Major expected. Multiple tactics and ambushes were attempted, but most were unable to remove more than a dozen or so birds before the rest would scatter and escape. Even mounting the guns on a truck to chase the birds down wasn’t terribly successful (maybe Major Meredith missed the “runs at 30 miles-per-hour” part of the tour?) Meredith later compared the resilience of the birds to Zulu warriors, impressed with how difficult they were to kill.

After two missions, the soldiers were recalled. While close to 1000 birds were killed, at the cost of no human casualties, it wasn’t considered an efficient method of wildlife conservation. The job was handed over to civilians, with over 57,000 bounties claimed in 1934 alone. Happily, the species has held on, and is even farmed at this point for meat, oil and leather. It’s not the greatest gig, but this kind of demand can sometimes help perpetuate a species.