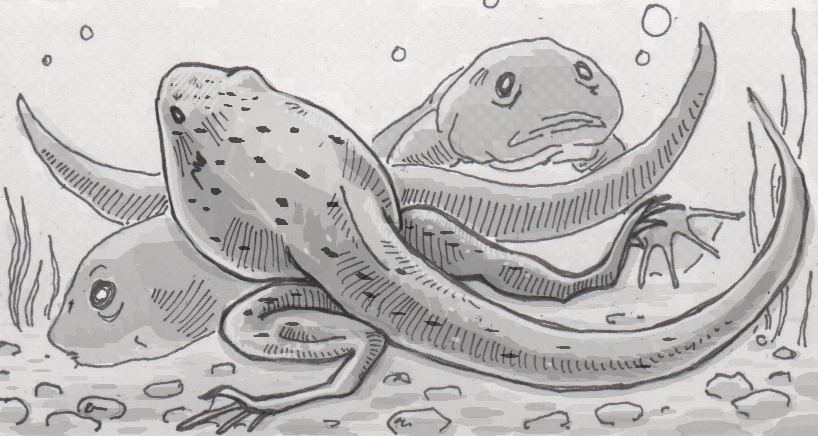 While humans may try to boost their babies’ brains by playing classical music to embryos, a variety of aquatic animals indicate that the real way to teach unborn offspring is with the smell of death. Snails, wood frogs and American bullfrogs have all been found to learn from smells associated with predation while still in their eggs. Once they hatch, they then use this information to stay safe, primed with information about what predators may lurk in their particular pond. This has both good and bad implications for ecosystems, as some of these creatures may be learning to be too successful for other animals’ good.

Exposure in the egg

This concept was first proven with pond snails (Lymnaea stagnalis) in 2014. Embryonic snails, still in their eggs, were exposed to the smell of tench, a predatory fish that eats the snails. Once the snails hatched, they were kept away from predators for a week, then exposed to that smell again as juveniles. The snails took the threat seriously, crawling out of the water in response, a behavior not seen in snails who hadn’t been “taught” about tench while in their eggs.

Similar studies have been now done with wood frogs (Rana sylvatica) and bullfrogs (Lithobates catesbeianus). In both cases, a third experimental condition was added. In addition to the eggs exposed to the smell of predators (salamanders and fish, respectively), eggs were also treated to the smell of predators with scents from injured or dead tadpoles. As you might expect, this trained the hatched tadpoles of both species to be especially vigilant in the presence of the predatory scents. The bullfrog tadpoles even showed some signs of developmental changes if their eggs had been exposed to smells of predatation. Aside from being quicker to hide behind barriers, the baby bullfrogs were also longer than control group tadpoles, possibly to enable faster movement.

Safety for which species?

From an ecological perspective, this sensitivity to smells creates opportunities and problems. Pond snails face invasive shrimp and crayfish in their environment, and so training embryos could be a way to help the snails cope with new predators. On the other hand, bullfrogs themselves are an invasive species in many environments, and this sensitivity only makes them more adaptable around would-be predators that might otherwise keep their population in check. The huge bullfrogs are known to eat just about any animal that fits in their mouth, so the idea that they’re also more robust as tadpoles means that they’re an even bigger threat to the other animals in the pond, regardless of smell.

Source: In the egg, American bullfrogs learn how to avoid becoming lunch by Chris Branam, Phys.org