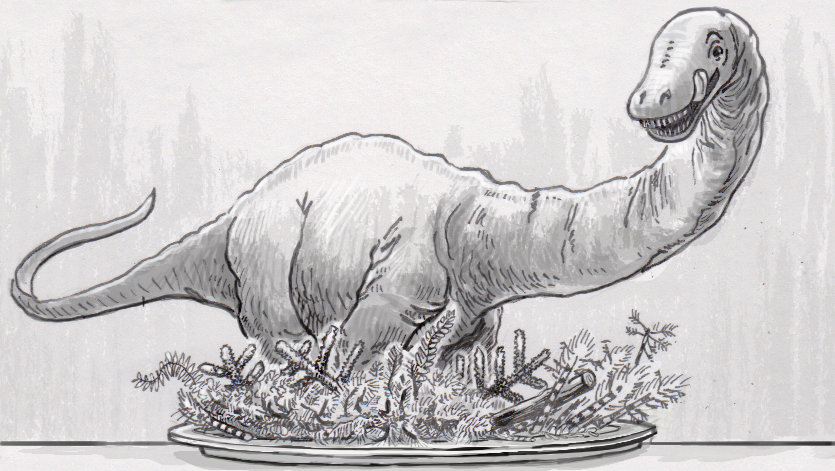 If a mouthful of meat has more calories than the same volume of veggies, how could the world’s biggest dinosaurs manage as herbivores? Between having relatively small mouths and a diet we presume to be based around green, leafy material, it’s hard to imagine how a 33-ton Apatosaurus could find time to do anything but eat in order to power its enormous body. To further complicate things, scientists have long believed that the higher concentration of carbon dioxide (CO2) in the Mesozoic atmosphere would have encouraged plant growth but left them with less nutritional value. Unless these animals had some amazing metabolic trick unheard of in any of their living bird and reptile relatives, the simplest explanation would be for some of these assumptions to be… wrong.

As one of the key building blocks of plant life on Earth, CO2 availability does make a difference in how plants grow. Since it’s hard to pull nutritional data from fossilized wood or leaf impressions, scientists conducted an experiment, growing various plants in different atmospheric conditions. The plants were all picked as approximations of the species that lived millions of years ago, and included things like dawn redwoods, monkey puzzle conifers, ginkgo, ferns and horsetails. Naturally, these plants have likely changed to adapt to modern conditions on Earth in the last 65 – 250 million years, but they could hopefully offer a sense of how CO2 would affect their nutrient levels.

Growing a tree or fern in 400 to 2,000 parts per million concentrations of CO2 is only step one though. To figure out how much one of these high-carbon plants might benefit a hungry dinosaur, researchers had to next come up with a fake digestive tract, which they created by fermenting the plants in cattle rumen fluid for 72 hours. By capturing the various byproducts of this process, this technique is used to figure out how easily digestible food is for livestock, and thus could give us a sense of how easy or tough any particular plant was to extract nutrients from. Chewing and other processing strategies like gastroliths weren’t really included in the ‘simulation,’ although since different species of dinosaur ate differently, that seems like a fair omission.

Everything a growing dinosaur needs

In the end, researchers found that the extra CO2 didn’t reduce the nutritional value of these plants as much as had been previously assumed. A 33-ton sauropod was calculated to have only needed 242 pounds of monkey puzzle leaves grown in the CO2-rich Triassic air. That’s certainly a lot of food, but since it’s at the low-end for an African elephant’s daily intake, it would have certainly been possible. If that weren’t good news enough for large herbivores, researchers also found that some plants showed no loss of nutrition at all. A dinosaur eating horsetails grown at three-times modern CO2 levels would only need 112 pounds of food a day, assuming they really liked horsetails.

The overall takeaway is that herbivorous dinosaurs likely had a more nutritious salad bar than we’d ever thought. The gap between these nutrition values and earlier estimates suggest that ancient flora could have fed 20 percent more herbivores than anyone thought, possibly requiring reconsideration of dinosaur population density in general. As exciting as more giant sauropods and hadrosaurs may sound, not every animal would have benefited from these CO2-soaked leaves. Herbivorous insects rely a lot on nitrogen in the plants they eat, which was one of the few nutrients that was definitely reduced in the experimental plants. It’s too early to say at this point, but it’s possible that insect populations suffered in the way we had previously assumed dinosaurs did.

Source: The real palaeo diet: the nutritional value of dinosaur food by Susannah Lydon, The Guardian