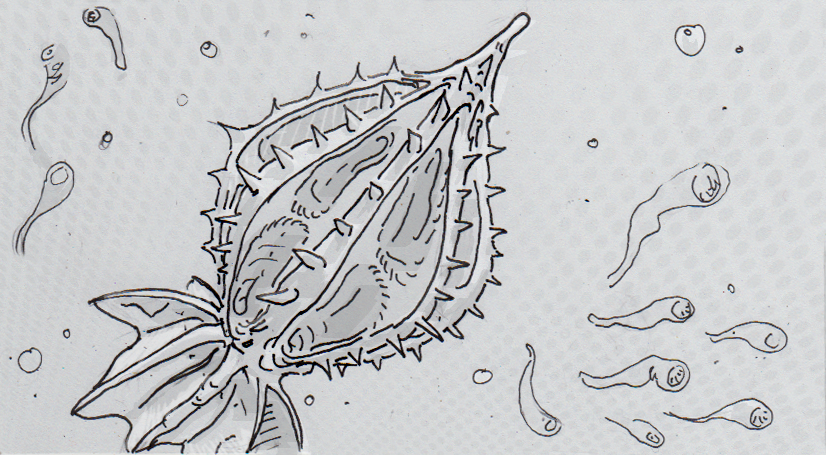 A jellyfish, as the name implies, is more or less gelatinous. Also known as ctenophores, the squishy bodies of these animals are composed of soft tissues contained in an outer membrane that is so thin it allows them gather oxygen from the water through diffusion. With anatomy like this, it was quite surprising when fossils of comb jelly ancestors were found with what seems to be rigid spines radiating out along their bodies. If that addition weren’t enough, they seemed to lack tentacles, opening new questions about how they functioned and fed back in the Cambrian Period, 485 million years ago.

‘Bones’ around the body

Fossils of six species of comb jelly have been found with these rigid structures, and even then there is still a considerable amount of variety. Structural anatomy spanned plate-like coverings to thin spokes covered in sharp spines. Internal organs used these structures as support and possibly protection. The “skeletal” components weren’t really bone, but most likely chitin, as found in insect or crustacean exo-skeletons.

The lack of tentacles meant that hunting must have differed from modern comb jellies. Rather than use tentacles to catch and move prey towards the mouth in the base of the body, these Cambrian jellies most likely followed the hunting techniques of modern lobate jellies, such as Bathocyroe fosteri. Without tentacles, these jellies lower their fleshy bodies down over prey to engulf and consume it.

All this adds up to an interesting example of the push and pull of evolution. Jelly DNA indicates that early species had tentacles, but these structured creatures somehow found themselves in an environment where developing various forms of armor without tentacles was a favorable body plan. But what was successful in one situation doesn’t mean it will always be the best way forward, as this branch of the comb jelly family tree clearly did not carry on, instead representing a strange tangent of what could have been the template for modern ctenophores.

Source: Ancient comb jellies had skeletons, but they still lost the arms race by Arielle Duhaime-Ross, The Verge