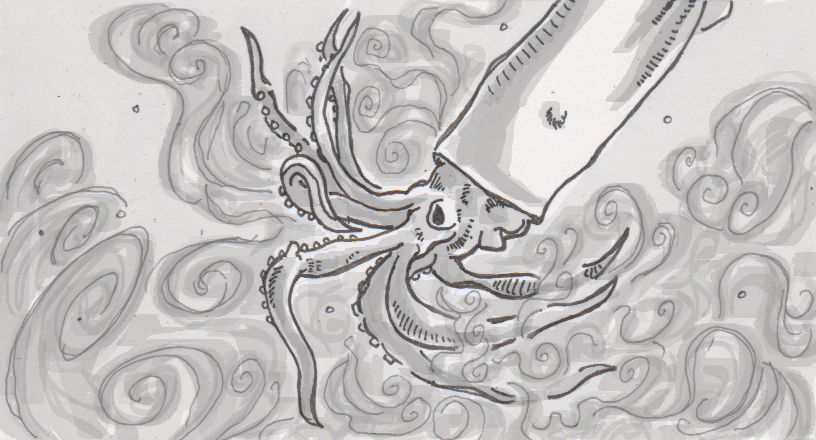 Explaining the ink ejected from a squid or octopus’s anus

I’m not sure what this says about schools today, but my kids are learning a bit of marine biology thanks to Mario Kart. As many of you undoubtedly know, one of the more frustrating power-ups in the game is a Blooper— a squid-like character that flies in front of rival racers to squirt black ink all over them, obscuring their vision for a time. This caught my kids’ attention recently, not because of the squid flying through the air, but because of the ink. They wanted to know what was happening, and why it would happen with a squid?

The ink itself has been historically been harvested to write with, but for the most part is pretty different from what’s in your average pen. Most pens today use dyes to darken your papers, as dyes can be thinner and less prone to blockages in a pen. Cephalopod ink can contain metals, enzymes, and most importantly, melanin. Melanin is the pigment that adds color to your skin and hair, and in this case makes the ejected ink dark and opaque enough to hide the fleeing squid or octopus. The pigment is thick and usable in the oceans, but not necessarily the best fit for your favorite pen.

All this said, we still have many questions about cephalopod ink, largely because we don’t know why these creatures ever started producing it in the first place. Fossils of soft-bodied octopuses and squid are hard to come by, but ink sacs have a strange durability that makes them oddly abundant in the fossil record. Some specimens have been found from 330 million years ago, which makes this anatomy older than any dinosaur. Unfortunately, the structure of the ink sacs and the composition of the ink seems to have changed very little in all this time, leaving few clues as to how cephalopods ever got started squirting in the first place.

Source: Why do cephalopods produce ink? And what's ink made of, anyway? by Mark Carnall, The Guardian