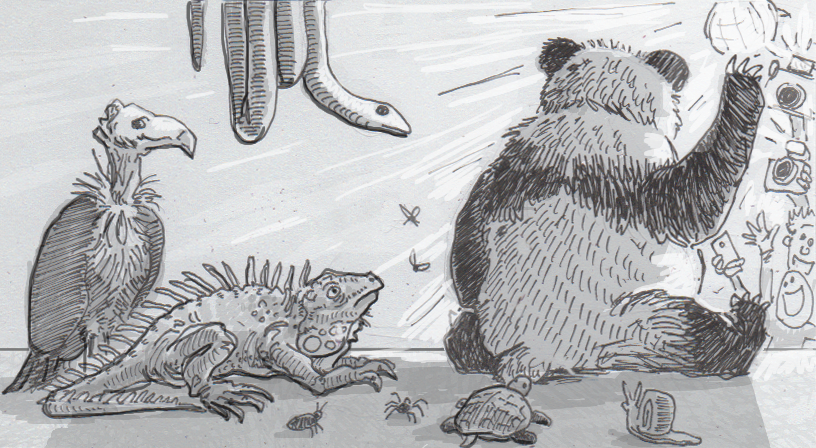 After a rainstorm, my kids will happily scour the sidewalk to rescue earthworms from careless feet, hungry birds and heat from the sun. I’ve noticed that my second grader’s enthusiasm for fetching worms seems to have declined a little bit, and I can’t help but wonder if she’s noticed that worms aren’t terribly popular, at least in comparison to more squeal-inducing critters like hummingbirds, dolphins or nearly any fuzzy baby mammal. This isn’t terribly surprising, as people show strong biases towards saving their favorite animals over others, a status rarely bestowed on an animal many people think exists to be fish bait.

Worms’ public image certainly has room for improvement, although there’s not much they can do to reshape their image. Conservationists have noted that the the public, and therefore a lot of public funding, favors a small range of animals, often based on looks. It’s much easier to capture people’s attention and sympathy when presenting cute, merchandising-friendly animals like a panda than something with scales, warts, or a tendency to scavenge for food. If that’s not an option, being especially big, or frightening or having some stand-out ability helps. Finally, the last reason people are likely to find an animal worth saving is if we think it’s worth eating, like salmon or bluefin tuna. Certainly not a lot of ins for worms there, but most earthworms you encounter in North America are thriving as an invasive species anyway.

With all of these biases in place, it’s good to note that we’re not necessarily doomed to a world with no warthogs, toads or spiders. The preference of “charismatic megafauna” may not be completely ubiquitous, as a study has found it to be influenced by where a child grew up. Kids that grew up in the continental United States would more likely pick “traditional” favorite animals, like wolves or bears. However, kids that grew up on the island of Andros in the Bahamas showed more interest in birds, lizards, fish and insects, mos likely thanks to their exposure to these species in their local environment. The downside to that same concept was an affinity for invasive feral cats, dogs and pigs on their island, but overall this shows that it’s possible for people to appreciate a wider variety of animal species (sorry plants.)

Assuming familiarity and exposure to species matters, there are efforts under way to show the world the value of the planet’s less attractive creatures. The Ugly Animal Preservation Society (UAPS) has sponsored a contest for the ugliest animal, done specifically get people looking at creatures that aren’t so easy on the eyes, but still very important to ecosystems. They’re not likely to start pulling conservation dollars away from elephants any time soon, but the fact that people are even considering the existence of a blobfish is helpful, if only to get them asking questions about how these creatures live.

In some cases, the PR problem an animal faces isn’t that people don’t know a creature, but that they’re convinced they don’t like it. Insects probably fall into this category more often than any other fauna, with things like spiders scaring people beyond rationality. To help diffuse this, researchers have been getting these bugs some new glamour-shots, perching the six- or eight-legged critters on their faces. Aside from being quite eye-catching, these images show that we needn’t be afraid of everything that doesn’t somehow resemble a baby human. That said, I still haven’t seen anyone with worms draped all over their faces, but I can’t count my kids out of that race just yet.

My four-year-old asked: How are we protecting salmon if we’re eating them?

On an individual basis, yes, that’s a good point. However, as a species, being considered “useful” to humans may be easier than explaining to lawmakers how keystone species, or ecology in general, works. Salmon wouldn’t be the first animal to be saved so we could eat it.

Source: Too cute to die? Experts say we’re too selective about species we choose to protect by Tom Spears, National Post