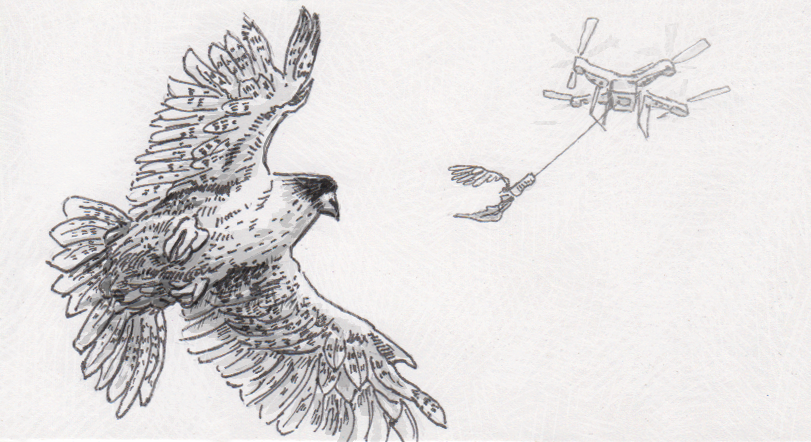 Looking at the handmade hoods, leather straps and small bells commonly used in falconry, one might assume that this ancient practice is still stuck thousands of years in the past. For most of us, there’s something archaic about training a raptor to perch on your arm before releasing it to chase down a small bit of prey. While those fleeting moments of drama do capture our attention, they’re only part of the story. The past four thousand years have given falconers plenty of time to develop their “art,” modernizing it to the point of incorporating autonomous flying drones as training tools. As a Canadian gyrfalcon recently found out, these efforts aren’t just for the falconer, but offer benefits to the bird as well.

One of the regular training concerns of a falconer is getting their bird to fly high enough to spot prey over a large distance. To get a falcon or hawk habituated to this hunting pattern, falconers have tried attaching bait to strings dangling from balloons or kites, hoping to lure their raptor to higher altitudes. Quadcopter drones improve on this method, since the drone can be more precise in its location and altitude, carry a camera, fly away from the raptor to imitate prey and hold up to the impact of talons a bit better than a balloon. To be on the safe side, some falconers include a parachute in the mix so that the bird and the drone can come down a bit more gently after a successful strike. An additional benefit of this kind of activity is that the birds get more mental stimulation, as well as exercise to keep their flight muscles fit.

That last point is where drones can provide therapy to injured raptors. The aforementioned gyrfalcon was found with a slice in its shoulder by a farmer, unable to fly and thus unable to feed itself. The 20-pound bird was taken to a rescue center where its wound could be tended, but that was no guarantee it would ever fully recover. While the cut healed, this female gyrfalcon wasn’t doing any active hunting and it’s muscles atrophied as a result. Fortunately, falconer Steve Schwartze was able to assist, and put the large falcon on a drone-assisted training regime to rebuild the weakened muscles. These workouts started modestly, with the raptor chasing the drone at lower altitudes to get used to moving again. As the falcon improved, the workouts became incrementally demanding, doubling the expected altitude within days.

After four months, the injured raptor was ready for release. She wasn’t necessarily “good as new,” but Schwartze felt that she could at least fly well enough to do some hunting on her own, continuing to strengthen her muscles along the way. It was a lot of work for both parties, but failure would have meant that this gyrfalcon would have probably needed care, and thus captivity, for the rest of her life.

My four-year-old asked: Did the drone fly itself, or was it remote controlled?

It’s not clear how much Schwartze steered the drone, especially since many drones offer both automatic and manual controls. Drones are sold for falconry training offering both options, and presumably advanced users switch back and forth depending on the exact type of flight they’re trying to engage in. The baseline is to automate the drone’s flight, so that may be the more common approach to this training.

My third grader asked: Don’t hawks attack the drones themselves?

The birds go after the feathery bait for the most part, which is suspended on a fishing line away from the drone itself. That’s not to say that the birds can’t handle a drone though, as a Dutch company is training birds of prey to attack drones directly, not for exercise but as security measures. It’s unclear how often those raptors will be deployed, but either way it doesn’t sound like hawks and falcons have any innate concern for quadcopters.

Source: How a falconer and a drone got an injured gyrfalcon back in the skies. by Sarah Hewitt, Motherboard