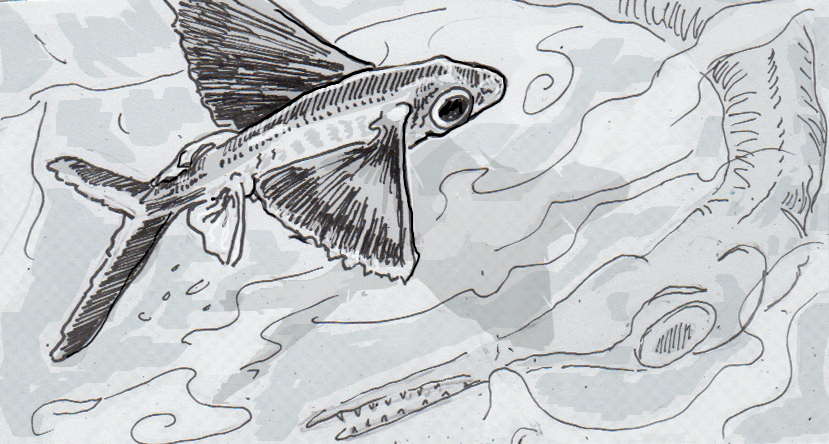 The family of fish that fly from fright or for food

Most of the time, it’s safe to regard fish as aquatic creatures, although they certainly don’t spend all their time in the water. Fish in the Belonidae family are famous for leaving the water, at least temporarily, as they leap out of the ocean, sometimes as high as four feet in the air (which is over twice that particular species’ body length). This is possible thanks to their strong tails and streamlined bodies, allowing these fish to achieve speeds of up to 37 miles per hour just before breaking the surface. The reasoning why these fish are so intent on leaving their natural habitat varies though, as some fish leave the water to avoid being eaten, while others leverage it for just the opposite.

The most famous member of the Belonidae family are flying fish (in the sub-family Exocoetidae) These omnivorous fish not only have the telltale torpedo-body and strong tail, but also expansive pectoral fins. When breaching, these fins are opened to resemble wings, and they allow the fish to glide over the water for up to 655 feet at a time. They’ll often chain a number of leaps in a row, sometimes traveling up to 1,312 feet by the time they really reenter the water. The motivation for such behavior is nothing less than survival, as the fish generally leap to avoid any one of the many predators that hunt them under the surface, such as tuna or swordfish. Leaping not only puts some distance between the flying fish and speedy predators like swordfish, but it also helps obscure their path. By moving into the air, light is refracted in a way that makes tracking the fishes movement distorted and difficult. Coupled with the element of surprise, the flying fish are probably trying to convince their predators that they’ve disappeared altogether, rather than just swam away.

Attacking from the air

Needlefish, on the other hand, turn the tables on this arrangement. They have the same, projectile-shaped body as their flying brethren, but they’ve traded the gliding pectoral fins for thin, tooth-filled mouths. They’re still able to leap from the water at amazing speeds, but their trips are much shorter, sometimes consisting of just skimming over the water’s surface “on” their tails. Recently, needlefish near Queensland, Australia were observed putting their aeronautics to good use though, using them as a hunting technique. Whereas underwater they’ll need to be within 19 inches or so to strike, an airborne attack allowed them to surprise their prey from far as six feet away. The extra space, plus unusual, and possibly invisible, attack vector means that prey is basically caught completely off guard, basically reversing the sneaky escape concept of flying fish.

These needlefish attacks aren’t always so refined though. The fish will often charge at light sources above the water, and so fisherman can trick them into stranding themselves in shallow boats when they miss their landings. However, the force of each three-foot fish from the water can be dangerous to terrestrial animals, particularly boating humans, as well. People have been injured and even killed when an errant needlefish unintentionally pierced their body.