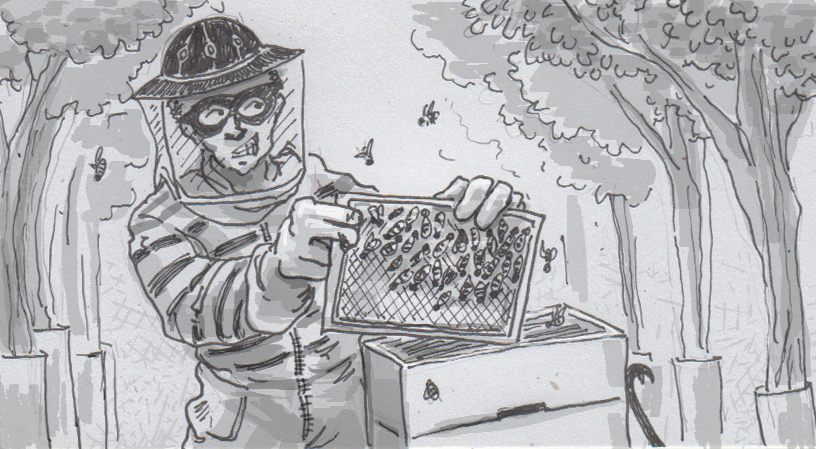 Many of your favorite foods come from bees. The bees aren’t ground up as an additive, of course, but are the prime pollinator for the plants producing the produce we want to eat. If an apple, almond or pear flower isn’t pollinated, then it won’t be reproducing through delicious fruit, seeds or nuts. This leaves farmers with a huge incentive to keep a healthy population of pollinators like bees around, even if it means paying to truck them in from across the country. Declining bee populations have put more and more pressure on this aspect of agriculture, to the point where bees are now being stolen right out of the orchards they’ve been brought in to pollinate.

The rent-a-bee concept goes back over 100 years, when beekeeper Nephi Miller thought of moving his bee colonies to warmer climates during the winter to keep their growth and productivity up. Since then, it has become a huge concept in farming, with variable pricing like some kind of agricultural Uber car ride service. If your crop is something less enticing to bees that won’t promote their growth, like pumpkins, you’ll pay more than farmers growing bee-friendly flowers, like apples. What’s more, there’s a surge-pricing aspect to it, raising the price per hive when demand for bees goes up, such as each spring when almond farmers call in 1.7 million hives to pollinate their trees. In recent years, this has raised prices to $200 a hive, a $70/hive increase in the last 6 years alone.

Part of why prices are going up is because bee populations are struggling around the world. From 2007 to 2013, some 10 million beehives in the United States were lost to colony collapse disorder, a strange phenomenon wherein workers abruptly abandon their queen. On top of this yet unexplained problem, bees are also victims to many forms of insecticide intended for other targets. This means that while more people want more food, there aren’t any additional pollinators to help grow it.

So with this high-stakes situation, it may not be surprising that a growing number of farmers are complaining about stolen bees. Rented beehives are generally placed in orchards for a few weeks or months, but when it’s time to collect them they can’t be found. In some cases, the entire hive was taken, but marked hives denoting their owners have had only the internal honeycombs taken (along with the attending bees.) The care and skill demonstrated in these thefts indicates that trained beekeepers are involved, heightening suspicions that this is about stealing bees, not honey (which has been less and less profitable in the United States thanks to imports.)

While a few arrests have been made here and there, followed by felony convictions with jail time, beekeepers are now looking into GPS tracking for hives, installing security cameras or even hiring guards to watch the hives at night, when the insects are less active and it’s easier to move them.  On the one hand, it’s nice to know that the stolen bees are valued enough to be cared for by the thieves, since the world needs all the pollinators it can get. On the flip side, it seems that synthetic replacements for our honey-making friends will be in high demand as soon as they’re ready. Assuming they’re not easy to pocket as well.