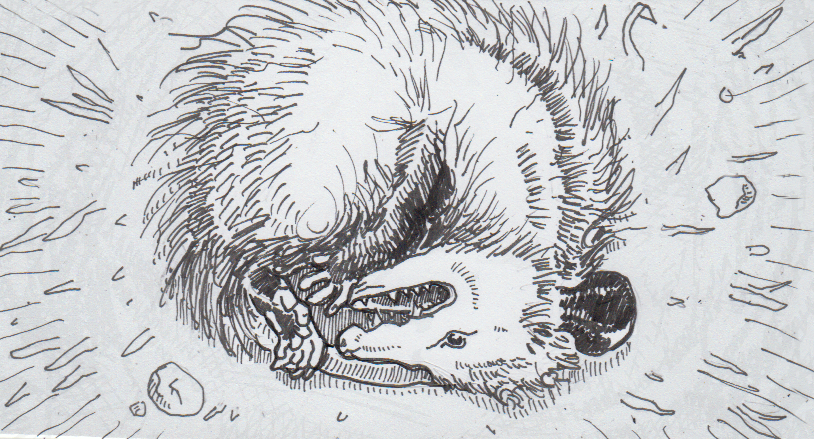 Feigning death for fun and profit

Most animals, aside from scavengers, generally try to minimize their contact with the dead. Interaction with a corpse could be anywhere from uninteresting to unsafe, and so unknown bodies are probably best left to the experts. This avoidance is common enough that a number of species make use of it through thanatosis, feigning death to escape predation, surprise prey or just have another shot at reproduction.

The most common use of playing dead is to avoid looking delicious. Many animals will roll over and assume a pose meant to invoke their imminent putrescence. Popular poses include curling up one’s legs and feet, while rolling onto the back, exposing the animal’s stomach (because who exposes their vitals unless they’re already dead?) To maximize the effectiveness of this pose, fire-bellied toads stomach is red with black spots, warning of potential toxicity if they’re eaten. Hognose snakes add smell to the farce, secreting a foul-smelling liquid to make them less appetizing. Opossums go all out, stiffing in their pose for up to four hours, complete with foaming saliva and gross smells to really sell the “too rotten to eat” idea.

Being dead doesn’t seem like a great way to catch prey, unless it gets your prey to ignore you. Two species of cichlid fish from Africa have blotchy markings on their skin, possibly to look like they’ve begun decomposing. When they’re ready to catch a meal, they start by sinking to the bottom of the lake where they live, holding still until a prospective scavenger arrives. They can then spring their trap for an easy meal.

A species of nursery web spider, Pisaura mirabilis, use thanatosis so that they special someone will give them a second chance. When trying to attract a mate, the male spiders will bring a gift-wrapped insect for the female to consume. If she doesn’t seem receptive to mating, the male will play dead and hitch a ride on the gifted-meal, basically so that he can stay close to the female without actively stalking her. When she stops to eat her prize, the male spider perks up for a second attempt at mating.