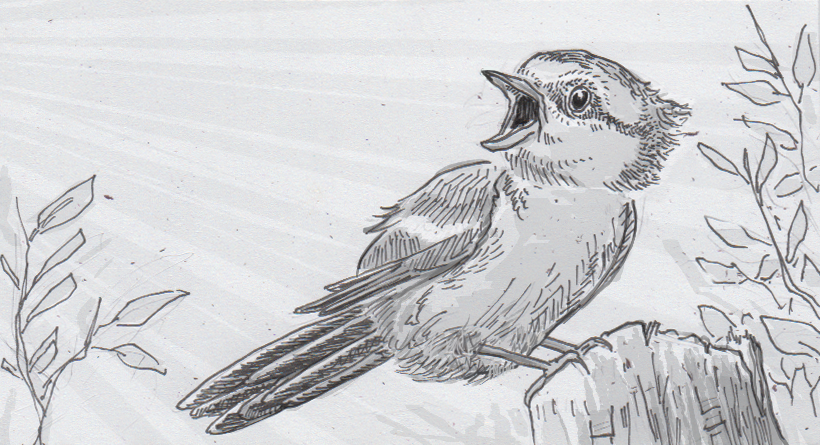 While showering seems to be a common inspiration for humans to sing, birds generally sing for the benefit of very specific audiences. Male songbirds teach their sons to sing, and possibly modify, melodies to woo potential mates. Various species of birds are known to sound alarm calls in order to rally help, or at least incite a massive evacuation that will hopefully incoming predators. Female blue tits (Cyanistes caeruleus) seem to have missed all the memos though, and have been observed singing songs to their predators, leaving scientists to wonder how that helps with much of anything.

While this situation was confusing, it was quickly established that this wasn’t really a case of cross-species, gender-bending courtship going on. Males had occasionally been seen singing in the presence of predators, but that didn’t deviate enough from their other behaviors to turn many heads. The fact that the females sang tunes that were very similar to males’ predator-response songs started to shift the focus of the question, putting the interaction with the predator in the spotlight. What would prompt these small birds, male or female, to sound off when danger was near?

To narrow the possibilities, researchers posted fake Aesculapian snakes (Zamenis longissimus) and sparrow hawks near blue tits, then gauged the birds’ reactions. The snake didn’t appear to be a large concern, eliciting no music from either sex. Aesculapian snakes target nestlings rather than adult birds, and the adults are capable of driving the reptiles away if they catch them. The faux-sparrow hawks, on the other hand, eat adult birds, and the blue tits seemed to be very aware of that danger. They broke into song when the hawks were spotted, which raised the idea that it was simply an elaborate alarm call.

Taking a stand through song

If sparrow hawks warranted alarm calls, the blue tits didn’t seem to understand how alarm calls are supposed to work. Instead of calling attention to a danger that your peers might not be aware of, the blue tits would sing alone or if their partner was right there, sounding off with them. The females didn’t seem to be warning the males about the hawks, which might mean the song is for the hawk itself. The singing blue tits are clearly exposing their location with song, but it may be a sort of psych-out. They’re announcing that they see the hawk, and thus shouldn’t be considered an easy target, presumably in hopes that the hawk will save its energy on what might be a wasted effort. Almost like a reverse alarm-call, the tits are telling their predators to go eat an unsuspecting neighbor, since it’s too late to surprise them.

To verify this, more studies will be needed to see how sparrow hawks react to singing prey. If they’re deterred, then perhaps the male and female tits have good reason to sing the hawks into conceding. If the hawks don’t seem to mind the pre-meal serenade, it would lend support to an alternative explanation for the tits’ songs: the poor birds are basically in a state of panic, and the song is the result of rising stress levels when staring down their potential doom. It’s a bit less uplifting for music lovers, but also a very understandable response.