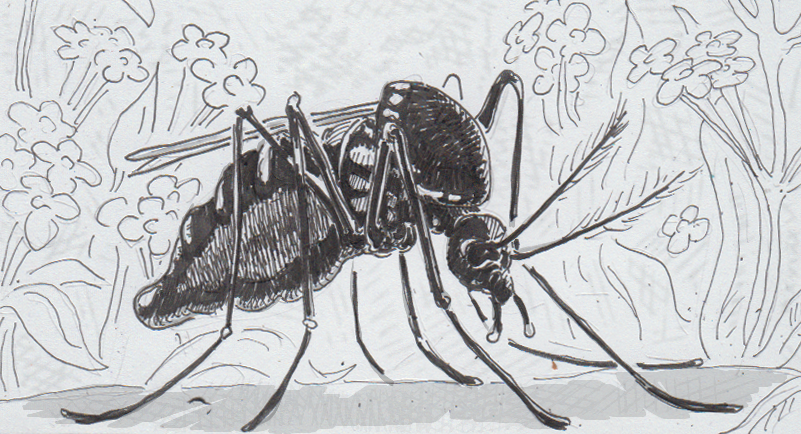 Mosquitoes like a beautiful nursery, but probably not for the same reasons you’ve decorated your child’s room in baby blue or Mario Kart murals. Researchers have been experimenting with Asian tiger mosquitoes (Aedes albopictus), whose numbers have been growing in the United States in hope that they’ll reveal preferences that might be used against them. From the starting point of standing water, a number of other elements have been offered to egg-laying females and found definite patterns, such as the attractiveness of a nice butterfly bush for the eggs to enjoy before they hatch.

The first findings from this study were that the ovipositing, or egg-laying, mosquitoes looked for larger containers to hold their eggs if given the option. However, relative attributes like size might be harder to really control down the line, and so other, more binary options were tested as well. One such choice was the presence of flowers from a fragrant butterfly bush (Buddleja davidii), which seemed to be held in high regard by the mothers-to-be. This wasn’t entirely surprising, as the insects are known to eat nectar as a source of food. It wasn’t clear if the mosquitoes were nesting near the flowers to have a convenient snack for themselves, or if the flower’s sugar was intended to be an accessible first meal for their young after they’d hatched (and matured enough to leave the water they hatched in). The latter theory is a distinct possibility, since the ovipositing insects in this study were also fed some blood sausages in advance, and thus probably weren’t flying on an empty stomach.

Managing mosquitoes isn’t just because of the itching and annoyance females cause when we’re outdoors. They also carry and transmit a variety of diseases, ranging from malaria to the Zika virus being found along the southern border of the United States. While it’s likely impractical to try to remove flowers from locations near water, creating more floral fragrances may be the answer. Traps for Asian tiger mosquito could be baited with the smell of flowers, drawing them in before they have a chance to lay their eggs, thereby limiting their reproduction. Some current traps rely on sugar-water as bait, which is obviously similar to nectar, but might be a less effective cue to catch the insects due to a lack of the flowers’ phytochemicals that give it its smell.