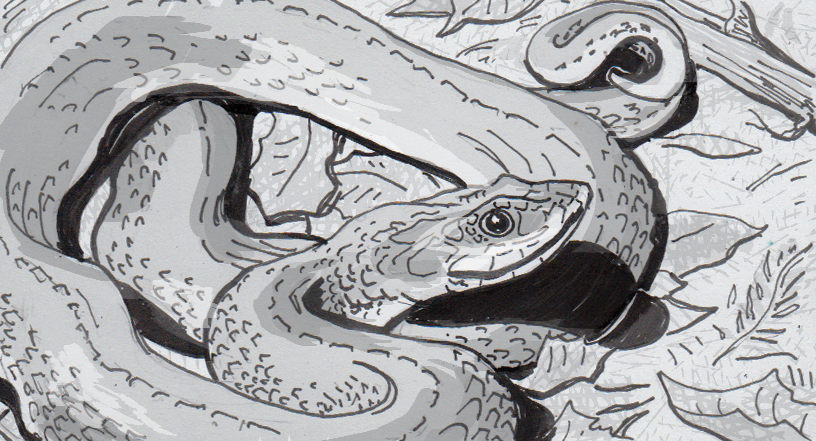 Sexual reproduction dates back to early eukaryotic species, and has been passed down to huge swaths of life on Earth. By sharing and recombining genetic information from two parents, a species can increase genetic diversity, hopefully increasing its compatibility and success in its environment. Generally, this is facilitated by male germ cells (such as sperm) fertilizing female cells (usually eggs). This arrangement requires that organisms find a suitable mate, which is sometimes an energy-intensive process, if there’s even a potential mate to pursue. If no options are available, some species can give their genes another chance by reproducing asexually.

A recent example of this surprised an intern at the Missouri Department of Conservation’s (MDC) Cape Girardeau Conservation Nature Center. Kyle Morton found membranes in the tank of a yellow-bellied watersnake (Nerodia erythrogaster), and originally mistook them for tomatoes or regurgitated food. The female snake had not been in contact with a male for eight years, and so the chance of offspring was the last thing on Morton’s mind.

Fertilization without a father

The answer to this mystery was that the female snake seems to have experienced parthenogenesis. Parthenogenesis is a process where a female can “fertilize” an egg with her own egg-progenitor cells. If no males are available, such as with this snake, the female is essentially reusing her own gene pool as a substitute for male’s side of the equation. Parthenogenesis has been witnessed in a variety of organisms, from plants to insects to some reptiles. If genetic testing confirms the babies’ origin, this will be the second time this particular snake has given birth to fatherless offspring in as many years.

There’s a small chance this isn’t the case though. The less likely explanation for this birth is that the mother could potentially be carrying sperm stored from an earlier encounter with a male. The previous record for carrying sperm has been documented at five years, and so this eight-year gap seems less likely than the mother fertilizing herself.