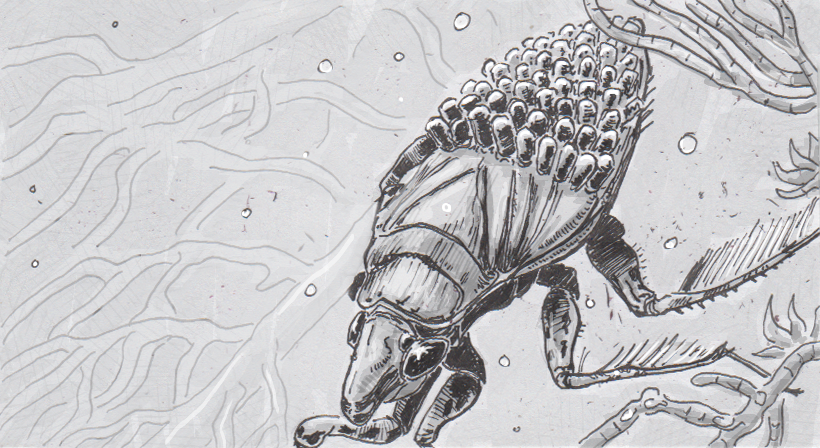 Female water bugs find egg-carrying fathers to be quite fetching

Giant water bugs can grow up to four inches in length, and are noted for the advanced predatory tactics they employ to capture food. That food can be everything from other insects to small fish and amphibians, with the occasional snake or baby turtle thrown in for good measure. Their bite is considered to be very painful, and yet they’re also noted for spending a good chunk of their time as walking nurseries. After mating, females will affix the bugs’ fertilized eggs on the male’s back so that he can keep them safe until they hatch. It turns out that this protection is so valued that an egg-laden father may also be setting up his next date, as females greatly prefer a male carrying the kids.

While members of the Lethocerus genus lay their eggs on a plant, which the father then guards, researchers were interested in understanding why other species of water bugs prefer to have the kids directly on their body. Did carrying the eggs keep them safer while dad moved around to hunt? Were there different environmental issues that might make the right plant inaccessible? Or did an egg-laden back mark that father as a more desirable mate, almost like a prenatal version of a lion’s mane or peacock’s tail?

There was some evidence of the latter hypothesis, but to really test how becoming a parent made these male Appasus japonicus bugs more attractive to potential moms, researchers started manipulating their eggs. When given the option between a male with his eggs removed, or a male already loaded with ten or more eggs, female water bugs showed preference for bug more obviously marked as a father-to-be.

The eggs seemed to outweigh females own preferences even. Mothers were presented with males they’d seen in earlier rounds of research, only this time with eggs on the previously-spurned male. If the female had doubts before, the eggs seemed to make up for it, and she would switch her mating preference accordingly.

This clearly makes breaking into the water bug singles scene rather difficult, since apparently the best thing a male can to to impress a female is to have already mated with a different female. It’s not so much that eggs are attractive on their own as much as the promise that an egg-carrying dad will do an equally good job with a new mate’s brood, if given the chance.