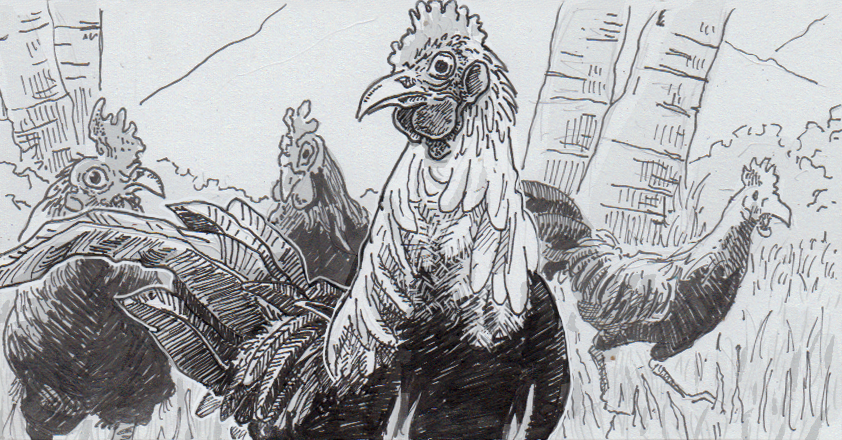 Feral chickens bringing some barnyard back to the junglefowl

Is domestication reversible? As a series of alterations made through artificial selection, can a lineage of animals revert to their morphology before they encountered human breeders? Many animals are said to ‘revert’ to a feral state if left to breed outside of human controls, including dogs that form their own packs, or pigs that start growing tusks, but researchers want to determine if they’re actually rolling back their genetic clock, or if there’s something a little more nuanced going on. To start with something a bit easier to handle, they’re looking at wild chickens in Hawaii.

Hawaii’s ancestral chickens were brought to the islands around 1,000 years ago by Polynesian settlers. Those birds were likely very close to wild chickens known as red junglefowl (Gallus gallus). Some of these animals weren’t reined in too tightly, as by 1778, there is evidence that some of these birds were running loose, essentially as wild chickens. Those wild birds were eventually isolated to just the islands of Kauai and Niihau, which is actually great for people who are tracing their genetic history today, since it means the number of influences on their population is much more limited than animals living on an open continent.

A key influence has been the introduction of domesticated chickens. In both 1982 and 1992, large numbers of domesticated birds were blown out of controlled yards and into the forests by hurricanes. They apparently found their wild brethren, forging what is now a robust population of genetic hybrids. The amalgamated birds now bear a sort of patchwork of features from both domestic and wild lineages, with environmental pressures picking and choosing genes from both sides of the family.

Your mother’s legs, your father’s beak

From the domestic chickens, people are seeing patches of white feathers, yellow (versus gray) legs, and even more traditional crowing in the roosters. Some of these things may just be hanging on because no other traits are out competing them— there are no natural predators on these islands, and so darker coloring for camouflage isn’t all that important, allowing some white plumage to continue. The chickens’ growth seems to be somewhere in the middle. The hybrid birds are growing larger and maturing faster, as per a farmer’s preference, than wild chickens, but they’re a little smaller than chickens living in a roost.

Some traits to seem to be “reverting” to a more ancestral state, including brooding habits and temperament. Humans looking for eggs bred hens that laid eggs every day, and then left them unattended. Hybrids needing to scrounge their own food and guard eggs against theft or damage can’t be that cavalier about their young, and so they’re laying eggs seasonally while sitting on the nests, much like their wild ancestors. It also hasn’t taken long for the birds to become more skittish about human contact, which is striking since changes in personality don’t take many generations to set in. This may be because wild animals tend to have larger brains than their domestic counterparts, with more gray matter to be on alert for environmental stimuli. For this reason, hybrid bird brains are being examined to see if there are any clear shifts in anatomy in recent generations.

As much as it seems that the hybrid birds are reclaiming their genetic history, it’s kind of an oversimplification to think their ancestors’ DNA was perfectly preserved, locked away somewhere in the back room of their chromosomes. New mutations do sometimes render old genes inert without removing them, but it’s usually not a clean, binary switch. In other feral animals, some traits reemerge, but not as exact matches for their wild counterparts. Wild dogs, for instance, will form packs on their own, but they’ll lack the sophisticated social abilities that allows wolves to be such good hunters. As the hybrid chickens demonstrate, in the right environment this kind of shift isn’t necessarily a bad thing.

There may be an instinct in people to declare domesticated animals ‘inferior’ or ‘adulterated’ thanks to human intervention, but since evolution is really about reacting to the dynamics of an ever changing environment, this doesn’t really hold up. Animals have constantly been changing alongside their environments, it would be hard to declare any one particular specimen as the genetically canonical record of its entire species. Sure, a chihuahua would likely fair poorly in the African savanna, but then again, I don’t want to see how a wolf would fair if someone tried carrying one in a coffee shop any time soon. I think I’d rather see them with a hybrid chicken, now that I think of it.