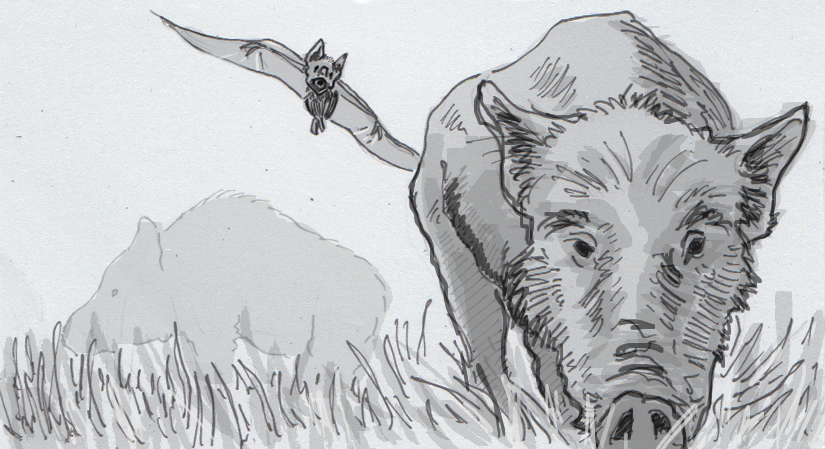 Invasive species are bad news on their own, but South Americans are finding that they can also bring out the worst in native animals as well. Researchers in Brazil have been monitoring the rise of feral pig (Sus scrofa) populations around the Amazon jungle, noting a variety of dangers they bring with them. In addition to the direct damage the pigs and boars cause to both crops and native plants, they’re also proving to be a nexus for rabies transmission, because vampire bats seem to find them to be quite delicious.

Vampire bats (Desmodus rotundus) are native only to the Americas, and various studies have looked at how they spread blood-borne diseases like rabies in the past. The bats’ feeding isn’t all that dangerous on its own, as the bats are able to make very precise, minimal incisions in their prey to drink blood. However, the bats’ saliva can transmit rabies to their otherwise unharmed prey, which then poses a very serious threat to both humans and livestock as it becomes a new vector for the disease. These earlier investigations already found that bats readily feast on domestic pigs on farms, so increasing numbers of feral pigs throughout the forest is effectively creating a buffet for hungry bats. According to observations gathered from automatic camera traps in the Amazon, the feral pigs may account for as much as 10% of a vampire bat’s diet.

Rather than simply displacing other prey on a vampire bat’s plate, these new, feral food sources seem to be boosting bat populations as well. It’s estimated that in the Brazilian Amazon, 1.4% of vampire bats may be carrying rabies, but in other areas, such as Peru, that number may be as high as 10%. Even if those percentages remain steady, an increase in the overall bat populations will mean more chances for rabies transmission, which has farmers worried about their livestock. Even with some domesticated animals being vaccinated for rabies, the bats may also carry other transmittable diseases, such as hantavirus or coronavirus.

Since invasive species generally have no natural checks on their populations, it stands to reason that the feral pigs that are throwing this ecosystem out of balance need some form of intervention before they turn the bats into an inadvertent player in some kind of disease outbreak.