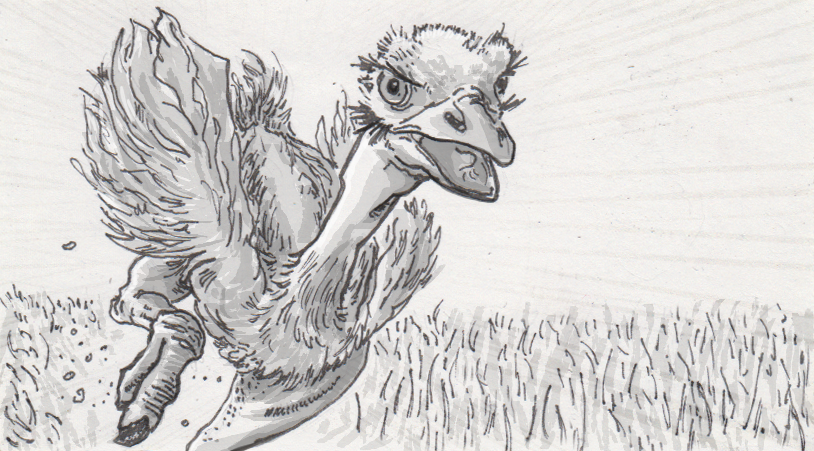 Figuring out the functional advantage of an ostrich’s four kneecaps

What makes ostriches the fastest bird on land? Is it their their nearly four-foot-long legs? Their single-toed running? Or maybe the secret to their 43-mile-per-hour speeds is their four kneecaps? The latter is an interesting possibility, partially because ostriches are the only animals to pack two patellae into each knee, suggesting that they help the birds achieve their record-holding speeds. Thanks to a well-flexed ostrich cadaver, we now have a few more answers.

Seeing the inner-workings of a kneecap isn’t easy when it’s running around on a nine-foot bird, but Researchers from the Royal Veterinary College in London were able to take a closer look at the knees of a dead ostrich donated for study. The bird’s legs were repeatedly flexed in walking and running motions while the knees were monitored with biplanar fluoroscopy, a sort of advanced form of x-ray imaging. The upper patella, or kneecap, looked very similar to what’s found in our own legs, wrapping around tendons that join the thigh to the shin. The lower patella was more closely mounted on the shin bone, presumably to protect the same tendons as they straddled the knee joint.

Not exactly the knees you know

The weird part was how all these pieces came together when the leg moved. In your knee, the kneecap helps guard tendons, but it more importantly moves the joint where those tendons move forward, past where your thigh bone ends. This small shift in distance allows the thigh muscles to use a lot less effort to straighten the lower leg, trading distance for force. Here’s a simple demonstration of this concept if you’re having a hard time picturing it. In ostriches, however, this isn’t the case, and their knees seem designed for nearly the opposite goal.

The ostrich kneecaps were found to actually demand more effort of the thigh bones to straighten the joint. Researchers don’t think that ostriches have gotten this far on defective knees though, pointing to the advantage in reversing how the tendons can be moved by the thigh muscles. They may require more effort in this configuration, but they seem to allow the leg to straighten faster, possibly bestowing a bit of extra speed in the process. The fact that ostriches can dish out potentially-fatal kicks may also be a factor here, as the faster delivery of force will impart more damage to a target than a slower leg would.

It’s hard to really isolate the benefits of these specialized knees, because there’s not really a good point of comparison in the natural world. Ostriches’ closest relatives, like emus or cassowaries, actually lack kneecaps altogether, so they’re not even a half-way point for looking at how patellae change these large birds’ sprints. It’s not just an issue with large, flightless birds though, as other birds in the same ratite family, like kiwis, do have “normal” kneecaps. While simulations of theoretical anatomy may someday prove the exact benefit of four kneecaps, researchers are also looking at larger questions, such as when the first patella evolved, and if all these new iterations somehow stem from a long-lost ancestor.

My third grader asked: Wait- their knee is up by their body?

Yep. As with many non-humans, ostrich thighs aren’t that long. The main joint we see when they run is the ankle, which is why it bends “backwards” when they flex it. What looks like our ankle is actually an elevated toe joint. It’s all the same bones, but they’re proportioned, and thus function, just a bit differently.

Source: Why the ostrich is the only living animal with four kneecaps by Michael Marshall, Zoologger